Can Brian Walshe inherit from his wife Ana’s estate? 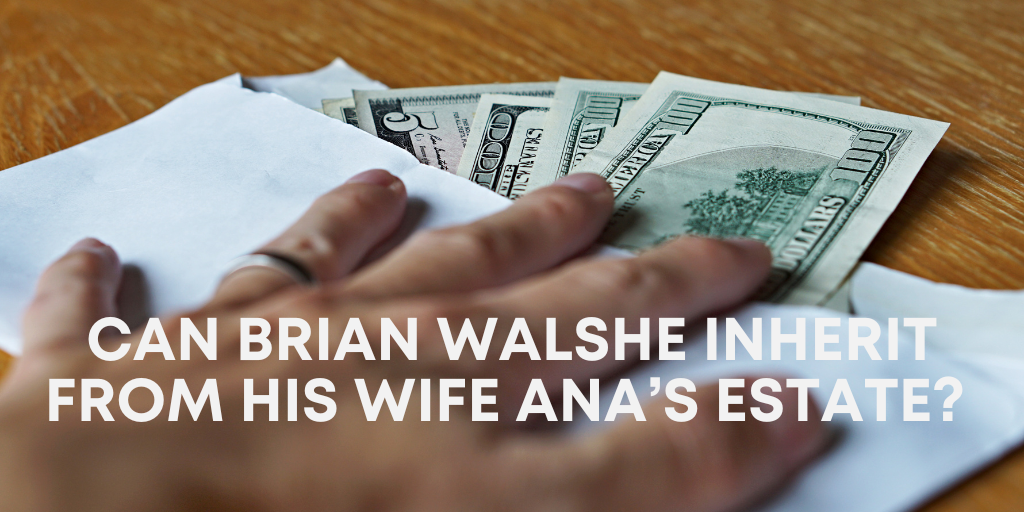 Can Brian Walshe inherit from his wife Ana’s estate?

The people of Massachusetts, and others across the country, have been riveted by the Ana Walshe case. As most of us know, Ana Walshe was last seen in the early morning of New Year's Day. She was later reported missing by her employer when she didn’t show up for work on January 4. Her husband, Brian Walshe, eventually reported her missing as well, but only after her employer did. Even though she, in theory, hadn’t spoken to her husband for three days, he hadn’t reported her missing. A lot has happened since Ana went missing, and Brian Walshe has since been charged with her murder. (See the article from Boston.com here).

As we all know, in our criminal system, those charged with crimes are innocent until proven guilty. So at this point, there has been no trial or conviction for Mr. Walshe. So legally, he's innocent until that happens.

There has been a lot of news about incriminating evidence in the case. It has been reported that Brian went to Home Depot and bought $450 worth of cleaning supplies, including tarps and a Tyvek suit. At this point, at least 10 bags of trash have been recovered, which included evidence like bloody towels, a hacksaw, and a hatchet. Although Ana’s body has not been found, there is DNA evidence linking the trash bags to Brian and to Ana. The sad reality is that the state believes he dismembered her and threw her out in the trash. Just writing that sentence makes me think about how despicable this case is. There was also DNA evidence in the car. Although it is likely that her body may never be found, the state did charge her husband, Brian Walshe, with murder, to which he has pled not guilty. (See the article from Boston.com here).

Some of the most incriminating factors in the case are the many Google searches that Brian Walshe made during the time that his wife was missing. His searches included questions about how to dismember a body and how long bodies will last before they decompose. (See the post from CNN here).

One Google search he made that caught my eye was “how long for someone to be missing to inherit?”. This Google search made me pause because I had to reflect on whether you could kill another human being and then profit from their death.

In other words, can you kill your spouse, or someone else, and then still inherit from their estate?

This is one case where common sense and the law do meet. In most cases, the law gets this one right. The answer to the question is no. That’s because of what is called the “Slayer Rule”.

What is the Slayer Rule?

There are federal statutes and state statutes that prohibit anyone from benefiting from the death of someone they have murdered. Statutes can have their own details and requirements depending on the particular state. In Massachusetts, the Slayer Rule is stated in Mass. General Laws Chapter 265, Section 46.

It states that a person is prohibited from inheriting the estate of someone they have unlawfully killed. Note, the statute does have limitations: it only applies in the case of convictions for murder in the first degree, murder in the second degree, or manslaughter. If a person is charged with one of these crimes, the inheritance process is halted, pending a verdict in the case. The Massachusetts Slayer rule does not cover vehicular homicide or negligent manslaughter. Some state rules are different in that regard, and the federal rule differs as well because the federal rule does cover “reckless homicide”.

If Brian Walsh were to be found guilty of first- or second-degree murder, or manslaughter, he would not be able to inherit from Ana's estate assets. But if he were convicted of negligent manslaughter, he could inherit.

But what about assets that are not part of her estate? Such as joint property?

We have to dig a little deeper because assets owned jointly or with named beneficiaries are not part of the person's estate.

The Massachusetts statute specifically includes joint property. Normally, in the case of a joint account, it becomes the property of the survivor if one spouse dies. The slayer rule puts a stop to that if the person is convicted of first- or second-degree murder, or manslaughter.

Can Brian inherit from life insurance?

When it comes to life insurance, we have to look at contract law. There is a rule for what is called “unjust enrichment” which is designed to keep someone from profiting after doing something illegal. That rule says that the proceeds of a life insurance policy will not be paid to a murderer, or to someone that the murderer has designated as a beneficiary. If the murderer took out the policy themselves, then the policy is void. If the policy was valid when taken out, then payment is still required by the insurer, but payment would be made to the next beneficiary in line or, if no beneficiary, then to the deceased person's estate.

Can Brian inherit retirement accounts of which Brian is a beneficiary?

Retirement accounts are a little different because they are accounts created by statute. Retirement accounts are governed by laws called ERISA. Right now, it's gray area whether ERISA controls the state Slayer Rule, but luckily, most of the time the result is the same. ERISA rules state that someone convicted of murder cannot collect as the victim's beneficiary. Where the federal rule and state rule may differ as that federal rule may allow a killer to be removed in the case of “reckless homicide”, while the Massachusetts rule requires a murder 1, murder 2, or manslaughter conviction.

Under the Slayer Rule, the Massachusetts probate court does not allow assets of the deceased person's estate to be distributed until the criminal charges have been played out in court. Once the verdict is rendered, and if there is a conviction, then the murderer is prohibited from inheriting from the victim's estate.

Does the Slayer Rule come into play in wrongful death civil suits?

No, it does not. It is significant that the requirement under the Massachusetts rule is a murder or manslaughter conviction. There are many cases where someone charged with murder is found not guilty but then later, is found liable in a civil suit for wrongful death. An example would be OJ Simpson. He was found not guilty of murder, but he was found liable in a civil wrongful death suit brought by Mr. Goldman's parents. A civil wrongful death suit is not sufficient enough to put the Slayer Rule into play. In other words, because of the not guilty verdict in the criminal case, the individual can still inherit from the deceased person's estate. A later ruling in a wrongful death civil suit does not rise to the level sufficient enough to enact the Slayer rule. Only the criminal court can do that.

What happens to Ana’s assets if Brian Walshe is convicted?

If Brian is convicted of murder in the first- or second-degree or manslaughter, he will not be able to inherit his wife's assets. Even with the Slayer Rule, most estate planners include Slayer provisions in their Last Wills just to be extra careful. Statutes can change over time, so the Last Will has a backup provision, just in case.

The hope, if Bryan Walshe is convicted, is that Ana’s assets would be used to care for her children who have suffered this tragedy. Brian Walshe’s google search would not have yielded the results he likely was hoping for. With the slayer rule in place, we can ensure that convicted murderers won’t get rewarded for their crimes.