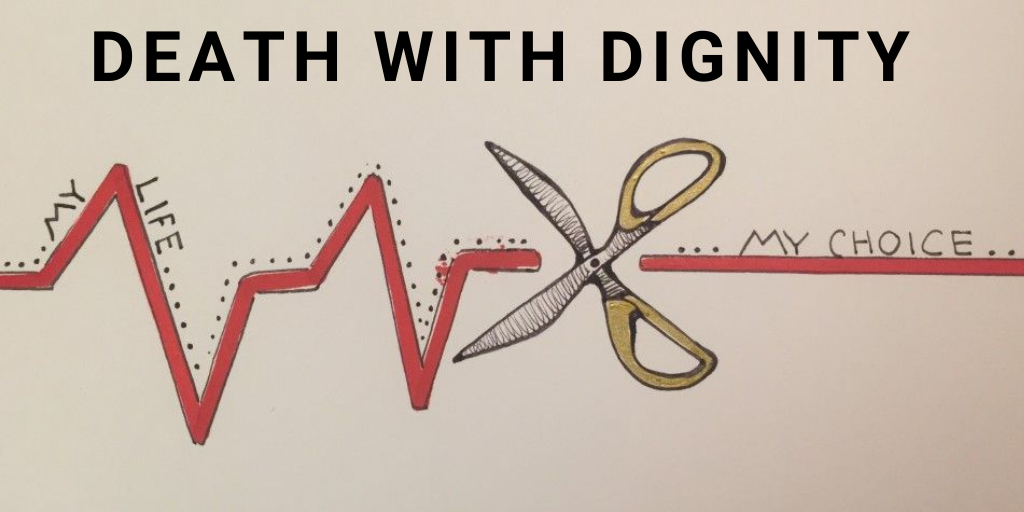 I support the “Right to Die” legislation. I’m not sure whether that’s a popular opinion or not, but it’s how I feel. That opinion has been formed over time, based on what I see in my work every day and what I watched my grandfather go through when he was suffering from dementia. Both of those factors have caused me to contemplate my own mortality and consider how I would want my own end-of-life care to be administered.

What's The Consensus Across The Country Right Now?

I am in support of the Death with Dignity National Center, www.DeathWithDignity.org, whose mission is:

“to promote death with dignity laws based on (our) model legislation, the Oregon Death with Dignity Act, both to provide an option for dying individuals and to stimulate nationwide improvements in end-of-life care.”

According to their website, their non-profit corp does the following:

Again, borrowing, from DeathWithDignity.org, you have to meet the following criteria in order to make use of a Right to Die statute, in the states that have it:

To qualify under death with dignity statutes, you must be

Where Do We Stand In Massachusetts?

In Massachusetts, the Right to Die legislation, known as the Massachusetts End of Life Options Act, has been introduced to the state legislature and is currently awaiting a vote.

According to the DeathWithDignity.org website, the proposed Massachusetts legislation is: “Sponsored by a total of 67 State Senators (20) and Representatives (47), S.1208/H.1926, the Massachusetts End of Life Options Act, advanced from the Joint Committee on Public Health on May 29, 2020, in an amended version, S.2745 / H.4782. The bill now awaits a vote in the Joint Committee on Healthcare Financing. The Massachusetts legislative session has been extended to December 31, 2020.”

Sometimes, when Bills are transferred to these committees for review, that is really where Bills go to die. With all of the other healthcare issues this year and a nationwide pandemic, I’m guessing that this legislation took a backseat to the more immediate issues of covid. But for me, seeing so many clients that are in nursing homes, and having lost over 20 clients to deaths that were at the very least accelerated by covid, the Right to Die is even more front of mind.

Why Do I Support The Right To Die Legislation?

Lots of reasons, and lots of things that I’ve seen both in my professional life, and personal life. Why am I thinking about it now? Well, this isn’t the first time I’ve written about this subject. See my blog from a year or so ago about this topic here.

What made me think about it again now? In all honestly, it was something I saw on Animal Planet. Yes, the channel with all of the nature shows.

I was watching a show about the San Diego Zoo. The show is really cool, and I want to visit that zoo someday. Anyway, there was a male lion named M’bari, who had been acting as if he was in pain. Upon further testing, the zookeepers determined that M’bari had a kidney tumor. According to the show, the lion was approximately 78 years old (in lion years) and would likely not survive major surgery. Instead, the decision was made to euthanize him. The keepers decided to make the last days of the lion’s life as comfortable, fun, and enriching for him as possible. They gave him his favorite foods, let him play with his favorite toys, and spend time with his girlfriend. As the days went on, M’bari became less and less interested in the things he enjoyed. His pain level was increasing, and so the zookeepers decided the time had come. They made sure his last day was a good one, and he was peacefully put to sleep.

Something that one of the keepers said, really resonated with me. He was talking about the lion’s quality of life, and that it was only going to get worse, and he would be in more and more pain with each passing day. The zookeeper said that he wanted to be sure that the lion’s “last day shouldn’t be his worst day.” In other words, they didn’t want to wait until he was in terrible pain before he was put to sleep – they wanted his last day to be a good day and not his worst day. While watching this I looked at my wife and said “why isn’t it the same for us? Why can’t we die with the same dignity, if we choose to?”

That got me thinking about the issue again, and I have been pondering it over the last few weeks. I was reviewing the different websites and saw a letter written by a young lady from Auburn, MA. In part, she wrote “Back in 2014 when I was in high school, I was moved and inspired by the story of Brittany Maynard, the 29-year-old young woman and a recent newlywed, who learned she had brain cancer and had six months to live. After researching her options, she decided she didn't want to spend her last few months in great pain and suffering, so she moved from California to Oregon where they had a Death with Dignity law. She had a peaceful and painless death by taking medication prescribed legally by her doctor on November 1, 2014”.

I too was moved by Ms. Maynard’s story. Beyond that, in my professional life, I see people with incurable illnesses every day. From cancer to dementia. Likewise, in my personal life, I’ve seen the same. Reflecting on those experiences helped me make up my mind, and I know that for me, I would want the choice to decide what’s best for me. I’d involve my wife and children in that choice, but I would want that choice.

Maybe I would choose to have my last day be one spent with my family, in comfort, and surrounded by my loved ones before I’m at the point where the pain prevents coherent thought or destroys any possibility of joy. Maybe I don’t want my wife or my children to see me writhing in pain, day after day, feeling helpless. Instead, I want the choice to decide to meet my maker on my own terms if I decided that my passing would be a mercy. And I'd like to think that I am strong enough to extend that mercy to my own loved ones if they made the same choice.

America is about freedom. It’s about choices. It’s about deciding what’s best for ourselves and our families. Who else, but me, is in a position to make that decision? Who else should tell me how I can, and cannot, die? Who else has the right to tell me that I have to live in the pain of terminal illness? For me, the answer is simple: no one. It’s between me, my family, and my God.

I’m not asking anyone to make the same choice I would, but I do think we should each have that choice for ourselves.