DMX and his Million Dollar Debt 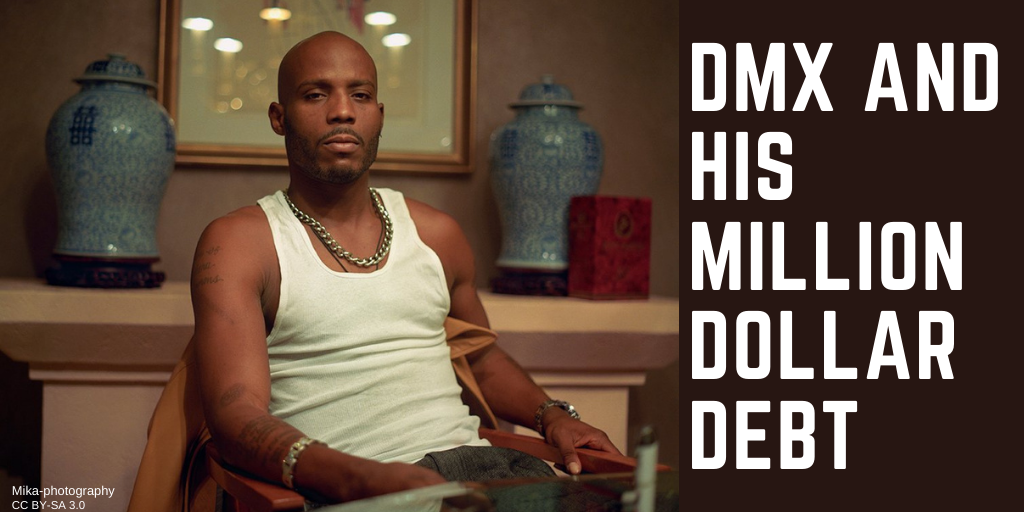 Earl Simmons, also known as rapper DMX, has passed away at only 50 years old.

His family has announced that his death comes after suffering a catastrophic cardiac arrest a week earlier. DMX was on life support at White Plains Hospital because he fell into a coma after a heart attack at his home. Outside of White Plains Hospital, friends, family, and fans gathered to pray and hope for DMX’s recovery. They played his music loudly and held up their arms in the shape of an X to show their undying support.

It is no secret that DMX had a tough life and spent some time in prison. He battled addiction as well and his troubled past was expressed through his music which was often dark and spiritual. His music was very popular, and he sold millions of records. His first five albums all reached number one on the Billboard chart.

Simmons was born in Mount Vernon New York and he was the only child of Arnett Simmons and Joe Barker. He grew up in Yonkers, which was known as a violent neighborhood at the time of his childhood. His father was barely in the picture while his mother struggled to raise him and his half-sister. Simmons was a hotheaded child, which led him to be beaten by his mother and her lovers. With a rough childhood, he turned to street crime as he grew into a teenager and spent a lot of time in juvenile detention facilities.

It wasn’t until the late 1980s that his love for music really began. He started out as a beatboxer who performed with a local rapper, Ready Ron. The name DMX actually came from his beatboxing as DMX is a name of a drum machine he would imitate. From there, he began writing and performing his own music. In the 90s DMX was signed to Columbia Records’ Ruffhouse and appeared on records with Jay-Z and LL Cool J. He then came out with his own music which began gaining popularity in 1998. His songs would be a way to release all of his past demons and get out his true thoughts and feelings, making it relatable and something people enjoyed listening to.

DMX was not only a successful rapper, but he had a HUGE family.

He has 15 children and most recently was engaged to Desiree Lindstrom. He was previously married to his childhood friend, Tashera Simmons, back in 1999. They were married for 11 years and had four children together, Xavier, Tacoma, Praise Mary Ella, and Sean. In 2010 they announced that they were going to separate, but they remained close friends. Simmons had multiple affairs during his marriage and some of which resulted in children. His 15th child, Exodus Simmons, was with his now fiancé, Desiree Lindstorm.

Since he had children out of wedlock, he faced a lot of child custody and child support issues, including needing to pay one woman alone a total of $1.5 million. In 2013 DMX had to file for bankruptcy as a result of his child support obligations. He also got into some tax fraud issues and was sentenced to pay $2.3 million back to the government in 2019, making his total net worth at the time of his death negative $1 million.

When talking about estate planning for celebs, we are usually dealing with huge estates, in the millions of dollars, and major estate tax problems to solve. Unfortunately, with DMX, we owed substantial monies at his death. A common question we receive is “Am I responsible for the debts of my deceased family member?” We can give you a typical lawyer answer: It depends. Or, “yes, and also no.”

The basic answer is no, we are generally not responsible for the debts of our loved ones unless it was joint debt. So if my wife and I have a joint credit card, and I die, she still has to pay the bill. But if I have a debt just in my name, the creditor could not go after her for it. BUT, the creditor can seek the money from my estate, by filing a claim in the probate court for payment out of my probate assets. That means, if I have probate assets (assets in my name alone, not jointly, and with no named beneficiaries), the creditor could grab those assets to pay the debt, even though my Last Will leaves everything to my wife. For that reason, we use our estate plans to keep assets out of probate, whenever possible.

In other words, if there is money in my estate in the form of probate assets, a creditor, such as the IRS, can take that money from my estate. Even though technically my estate is paying the bill, and it’s not my wife paying the bill, in reality, she is paying it, because it’s coming from the assets that were supposed to go to her. So even though we say she’s not responsible for the debt, the bill is paid out of assets that were supposed to go to her. She’s still the one taking the loss. We get around this by using Marital Trusts and keeping our assets out of probate, with a proper estate plan.

In most celeb estates, the family members come out of the woodwork to collect their share of the money. With DMX, we will see the opposite. No one wants to pay these bills, so they are likely all going to run and hide.

The lesson learned here? Don't go on to have 15 kids if you can't afford it! Also, make sure you pay your taxes because it comes back to haunt you and your family.

by Nicole Rego [email protected]
Connect with me
2 Comments
Anonymous, I appreciate your comment and apologize for any misunderstanding. I simply wrote this blog stating the facts about the size of his family and how it related to estate planning. I did not intend for any moral judgements to overshadow the sad fact of his passing. In regards of the streaming royalties to his heirs, they could very well see a portion of that. Although, without seeing how the contracts were written it is impossible to say what the outcome will be, hence why I left it out of the blog post. I hope this clears up any concerns you had about this blog and you understand this was never meant to be a statement on DMX as a person but rather just a statement about his estate planning.
by Nicole Rego April 30, 2021 at 01:38 PM
In very poor taste. No need to make moral judgments about the number of children he fathered. A very sad case certainly and my condolences to his family. It’s curious though that you didn’t touch on royalty income that his heirs should be able to exploit. His music has increased in terms of streams and sales posthumously. Won’t his heirs be entitled to those income streams?
by Anonymous April 29, 2021 at 07:41 PM
Post a Comment