Tiger King - A Much Needed Update! 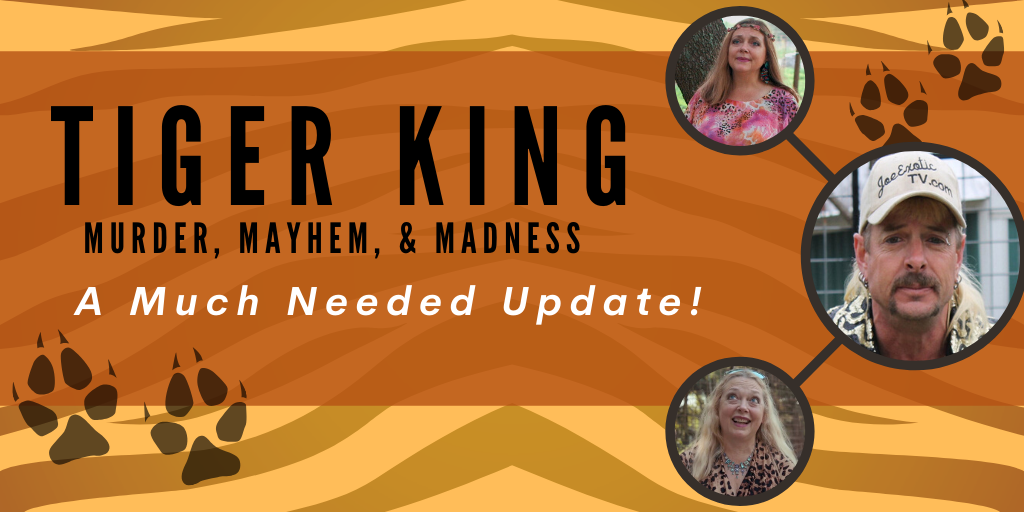 Who would've thought that Tiger King was the most normal part of 2020!

If you are not familiar with the Netflix sensation, Tiger King, get caught up by reading our previous blog!

If you are familiar, then let's dig into this juicy gossip!

Let's start by discussing that one-of-a-kind woman, Carole Baskin. Somehow Carole managed to accomplish her one goal - she is the new owner of Joe Exotic's zoo. A judge has ruled in favor of Carole's Big Cat Rescue in a lawsuit against the Greater Wynnewood Development Group - the previous owners of Joe's zoo. Who knows how she managed that! Maybe with all the money she got from her first husband's inheritance she hired some good lawyers...but who am I to say.

Not everything has worked out great for Carole though. If you're a cool cat and kitten then you must know that Carole is in some big trouble. As we all know Carole's first husband, who was a millionaire, went "missing" in 1997 and was declared dead in 2002. Well, since he was declared dead Carole got all his money based on some sketchy Will that she claimed was legit.

Due to the fame of the show, some experts decided to look into this Will and see just how real it really was. Turns out, the Will was forged. The notary on both the Will and the Power of Attorney claims that she has no recollection of authenticating them. They also brought in some handwriting experts and it was apparent that his signature on the Will was traced from his marriage certificate.

After all this information, both experts declared that this Will was 100% forged.

BUT WAIT - HERE IS THE BEST PART!

It looks like she has gotten away with murder...again.

The statute of limitations has passed and therefore Carole Baskin will avoid jail time over this forged Will. As far as all the money, assets, and estates she inherited, well that is still up in the air. Will she keep it all or will it go to his kids? Who knows!

I'm sure Joe is in jail somewhere screaming, "I knew it!"

Speaking of Joe, if you thought he was vocal on the show, he's even more vocal now that he is in jail! His husband Dillon, who was featured at the end of the series, has been Joe's voice since he was arrested.

Dillon has been voicing Joe's opinions since Joe can't do it himself! Dillon has even been featured on Jimmy Fallon, talking about Joe's time in jail and their relationship.

Apparently, Joe is not having a great time in jail. Joe is trying his hardest to get out of jail, even if that means throwing people under the bus! If you bought a tiger from Joe, you may need to look out! Joe is so desperate to get out, he is even calling on President Trump for help. I mean really, how far did he think he was going to get with that? It was also rumored that while in jail Joe caught COVID-19, and was put into isolation and forced to quarantine.

Joe is still serving 22 years in federal-state prison for multiple charges, the most serious being murder-for-hire. In March 2020 he filed a $94 million federal lawsuit claiming that he was convicted on false and perjured testimony. This is an active case, so who knows Joe may be getting out of jail early! For now, we will have to wait and see.

I mean it wouldn't be the weirdest thing that happened in 2020...