What Happened to Your Estate, Brittany Murphy? 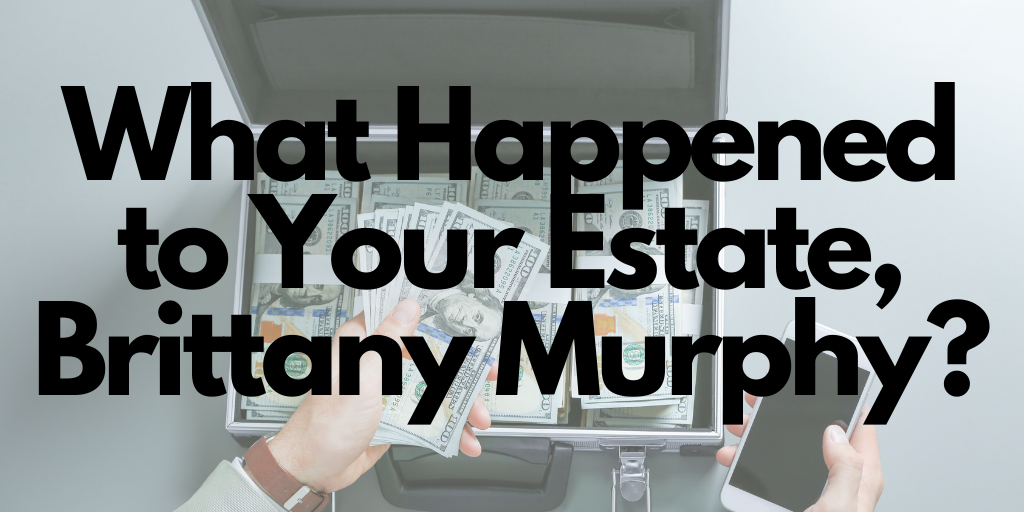 Most people think that her breakout movie was the film Clueless, where she played a high school teenager that moved to a new fancy town and was trying to fit in. The popular crowd takes her under their wing and helps her to assimilate into her new surroundings – it’s really cute and funny. Since then, Brittany’s been in tons of movies. Just Married is one where she starred with Ashton Kutcher as a young newlywed who gets into all kinds of trouble. It's hilarious. She plays a more serious role in the movie Don't Say a Word, where she portrays a mental patient who was being investigated by an investigator played by Michael Douglas. Her film career was impressive, and she was one of Hollywood's big stars from her late twenties through early thirties.

Strangely, a 32 year or old woman would die of pneumonia, and that's where the documentary comes in. The film sheds some light on the circumstances around Brittany's death and talks about the toxic home life she was living just before her passing away. When it comes to estate planning, Brittany's case teaches a sad lesson. She did take the time to do an estate plan, but she did not take the time to finish the process. She created all the right documents, but never took the final steps to fund those documents. Funding a document is like flipping the “On” switch. Lots of people make this mistake, and her situation clearly illustrates the harm that can come from that.

Brittany was raised by a single mother who took her to auditions and took her to the set to film TV and movies. Her mother’s name is Sharon, and the two were very close. In 2007, Brittany married British screenwriter, Simon Monjack. She was dead just over two short years later. The coroner determined that her cause of death was pneumonia with secondary factors of iron deficiency anemia and multiple drug intoxication. The anemia was since she wasn’t eating enough. As to the drugs, we aren't talking about illegal drugs here - we are talking about a huge number of prescription drugs. When Brittany was found dead in her home, investigators remarked that there were over 90 different prescription bottles on her night table, some of which were in her name and some of which were in the names of aliases.

In the time leading up to her death, Brittany had become increasingly isolated from her friends and even the people that she employed to help her such as her agents and accountants. According to the documentary, the cause of that was Brittany's husband Simon. He kept Brittany away from everyone and would not allow anyone to contact her except through him. She no longer had a cell phone, and any Hollywood directors or agents that wanted to speak to her had to call Simon. They had no way of getting in touch with her directly. Not only that, but the documentary revealed that Simon was responsible for Brittany firing her entire team of handlers.

From that point on, Simon became her agent, her accountant, her lawyer, her gatekeeper, and even her makeup artist. As far as I'm concerned, he also became her abuser. There are other types of abuse other than just physical abuse. Forcing someone into solitude and keeping them away from everyone else in their life is a form of abuse. It's clear from the words of her friends and those that were originally hired to help Brittany that Simon intended to keep her isolated. There's a statement from her accountant where he went to Brittany's home to have a tax form signed, and even then, he was not allowed to see her. He had to pass the tax form into the door to Simon, who interacted with Brittany and brought the document back. Again, she had no cell phone. In today's world, no cell phone is just crazy.

According to an article on yahoo.com, Brittany's estate was worth approximately $10 million when she died. The beneficiary of her estate was not her husband, Simon. Instead, it was Brittany's mother, Sharon. Sharon was living with Brittany at the time that Brittany passed away, and it appears that Simon was pushing Sharon into the same corner that he was doing to Brittany. No one could talk to Sharon unless they went through him. It was clear in subsequent interviews after Brittany's death that Sharon was afraid of Simon, and that she was afraid she would be thrown out of the home that Brittany intended to leave to her. The report is that Simon acted as if everything belonged to him.

Now, here's the rub. Brittany did do a Last Will. In her Will, she left her entire estate to her mother, including her Hollywood mansion. She even made a statement that said, "I am married to Simon Monjack, who I have intentionally left out of this Will." Brittany took steps to make sure that her mother would inherit her estate and not her husband. This may have partly been because her husband claimed to be wealthy in his own right. He claimed to be a billionaire and made many other outlandish claims to fame and prosperity. The documentary pokes holes in most of these claims and shows that he had a repeated history of relationships with wealthy women whom he swindled out of money and then left them high and dry.

Brittany also had a Trust, and she left everything in the Trust to her mother. That all sounds good, doesn't it? But here's the problem: Brittany only did half the job – she did not fund the Trust (that “On” switch, remember). She created the documents, so she took the first steps. She had the Will, and she had the Trust. But there is a second part to the estate planning process called Trust Funding. What does that mean? A Trust doesn't mean anything if the Trust doesn't own anything. Think of a Trust almost as a separate person. A Trust can own property of any type, including real estate and bank accounts, and the details of the written Trust determine what happens to that property when someone passes away.

She had a pension plan and a bank account, and she never put the Trust on those accounts. That means when Brittany passed away, those assets went directly to her husband, Simon. It's clear from her Will that this is not what Brittany wanted, and she did the right thing by creating an estate plan. But she missed that crucial final step of Trust Funding. Her Trust switch was still turned to “Off”. After she passed away, Brittany's business manager stated that her husband Simon started withdrawing money by the hundreds of thousands. There was even a report that said Simon's mother, Linda, informed Sharon that she had to leave her daughter's home, when, the home was the one asset actually left for Sharon.

Eventually, Sharon did take her claim to the house and was able to sell it for $2.7 million, which was over a million dollars less than what Brittany had purchased it for. She was able to leave the house to her mom, but everything else she had, including her bank accounts and her pension, was left to her husband in direct opposition to what her estate plan said.

The lesson here is that creating an estate plan is only the first half of the job. The second half is funding those documents with your assets. If you skip this part, then your entire estate plan might be for nothing.

To learn more about Trust Funding, check out the information on our website. If you created an estate plan, but did not finish the process by doing the Trust Funding, reach out to us and talk to us about it. Even if we didn't do the original estate plan, we can still help you fund it properly. Brittany's death was tragic, but it's even sadder that her final wishes were not adhered to. Don't make the same mistake.

by Michael Monteforte, Jr.
Connect with me
People come to me in trying times and when I tell them I can help them, the weight falls off their shoulders.
1 Comments
Unfortunately, while this is a public horror story, there are many more that few people hear about. All to often, assets are not properly titled and estate plans, benefit plans and other valuable assets end up with the wrong person at the wrong time when all it would have taken is a bit more work. Lesson to be heeded. Mike, I am sure you don't stop when the documents are signed. They need to be activated through documentation and funding.
by Barry Koslow November 19, 2021 at 12:09 PM
Post a Comment