An Estate Plan That Will Make You Scream - The Addams Family 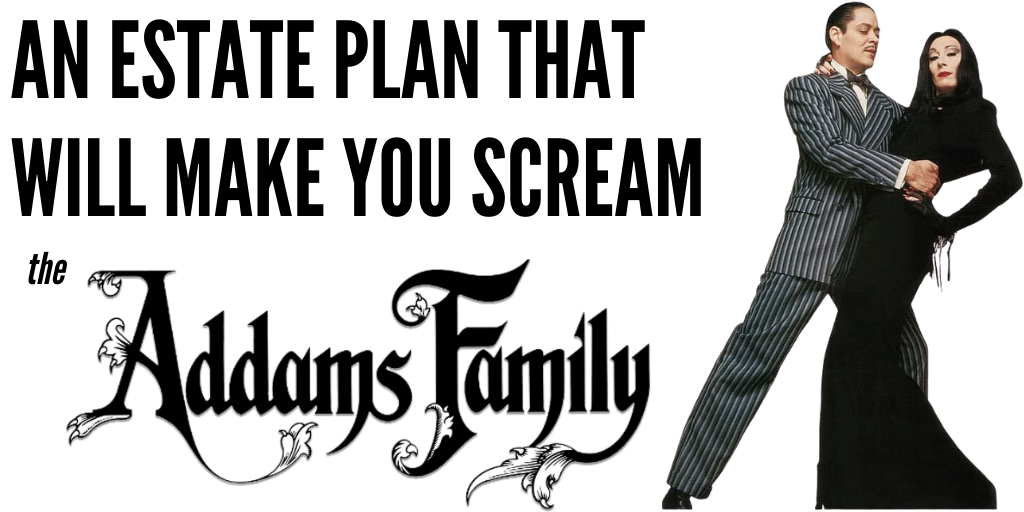 In honor of Halloween, let’s look at the estate planning tips that we would give to everyone's favorite scary family! They’re creepy and they're kooky, mysterious, and spooky, they’re all together ooky…you guessed it, the Addams family!

As good as the opening theme song was, the show itself was even better. I’m not as much of a fan of the remakes and movies (although Angelica Houston’s portrayal of Morticia was great!), but the classic original show was a family favorite when I was growing up. I always thought they had just had the coolest house in the world! I mean, who wouldn’t want to live in a house with trap doors, hidden rooms, and spooky (but fun) monsters and creepy crawlies?

As we know, they have two children, Pugsley and Wednesday. Pugsley is always cute and rambunctious, while Wednesday’s dark humor always had us wondering who she was going to torture next! As is the case with almost any family with young children, we start with our Big 3: Last Will, Power of Attorney, and Health Care Proxy. We have got the Will to deal with their assets if they pass away, and the Power of Attorney to give authority for financial decisions if Gomez or Morticia were unable to make those decisions for themselves. Then, if the creepy couple was unable to make health care decisions, we’ve got the Health Care Proxy.

We can’t stop there though, because this family needs a few more pieces to round out their plan.

The kids are too young to inherit money on their own, so we add a Family Trust. The trust allows us to distribute to the kids over time, when they are old enough, instead of a lump sum. That way we are not dumping a bunch of money on young kids. If we assume that Gomez and Morticia have some dough in the bank (did we ever actually see them go to work?) which could result in their having to pay estate taxes. To avoid that, we would add Credit Shelter Trust provisions to the family trust, and to secure the estate tax protections.

Now, who could forget Cousin It?

I always wanted to give him a haircut and see what was under all that hair! Cousin It couldn’t talk (he squeaked a lot though) and definitely had some issues with his physical health. We do not know if he even has hands!

If we consider that to be a physical disability, then I would suggest a Supplemental Needs Trust for our hairy cousin. A supplemental needs trust makes sure that we can leave money to someone with disabilities, but because it is in trust, the beneficiary would lose their rights to government benefits.

How About Uncle Fester?

This poor guy had the opposite problem as Cousin It because he was bald as a cue ball (you see why I like him?). There was a debate on the show about whether Uncle Fester or Gomez actually owned the Addam’s family home. For our purposes, let’s pretend that Uncle Fester was the owner – their house was a museum, remember? If Uncle Fester wanted to pass the home along to his beneficiaries while avoiding probate, he could put the house in trust.

If we use a Medicaid Trust, we can make sure that the home is protected if he needed to go into long-term care. That way, he wouldn’t have to worry about losing the home to Medicaid liens, nursing homes, or long-term care liens. Lastly, I would recommend a QTIP Trust for our pale and follicly-challenged friend. In one of the Addams family movies, Uncle Fester fell prey to a woman that was after him only for his money (played in the film by Joan Cusak). Whenever we have clients on second or third marriages, we can use a QTIP Trust to make sure the new spouse is taken care of, but at the same time, we make sure that the new spouse cannot disinherit Uncle Fester’s family.

Lurch worked for the Addams’ for a long time. We know that even though the Addams’ are creepy, they are generous. So, we can assume that they took care of Lurch and paid him well. They may have even set up a retirement plan for him.

That does it our favorite creep family’s estate plan.

Try getting that theme song out of your head now – good luck (don’t forget to snap your fingers!). To get some more information on The Addams Family, check out my latest YouTube video based on this kooky klan! Don’t forget to watch out for Thing – that disembodied hand could be sneaking up the back of your shoulder right now…

by Michael Monteforte, Jr.
Connect with me
People come to me in trying times and when I tell them I can help them, the weight falls off their shoulders.
4 Comments
I don't stand a ghost of a chance to match this. Although, did the business have a Sucksession Plan? If not, they could be subject to eternal intestate and Hade's Us Corpus. They could be dracula'd through the courts.
by Barry Koslow October 22, 2021 at 12:44 PM
by Barry Koslow October 22, 2021 at 12:40 PM
Howard, great question! Since the Addams family is not a non-profit, school, or church they would unfortunately have to pay property tax for their spooky home. In the case of property taxes, they are just like most of us!
by Michael Monteforte, Jr. June 17, 2021 at 03:18 PM
How about property tax? Did the Addams' family have to pay property tax on their home?
by Howard M June 15, 2021 at 08:53 AM
Post a Comment