Here’s one for the Gambler – Kenny Rogers 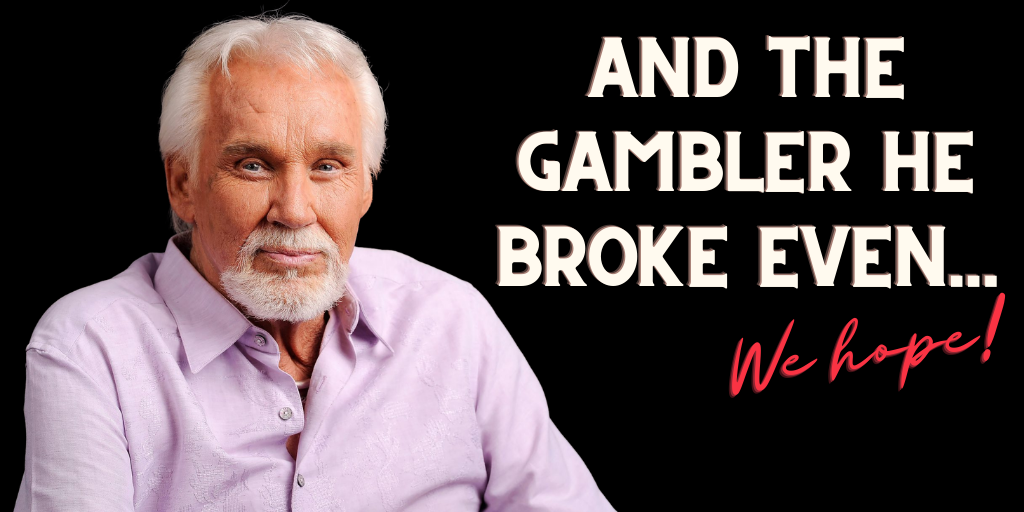 Even my kids know who Kenny Rogers is. I remember playing cards with them when they were little, the two of them singing: “You gotta know when to hold em’, know when to fold em…”. The guy had a million hits but that one brings the most vivid memory for me. My two little ones sitting on my living room floor, playing cards, maybe using pretzels or M&M’s for chips. And by the way, Gabby cheats.

We lost Kenny Rogers in March of 2020, right when COVID-19 was kicking into high gear in the U.S.

I’d say he gambled with more than just hands of poker – he was married five times! However, with career earnings of over $250 Million, there’s enough to go around. According to Wikipedia, Kenny had 120 hit singles, he topped the country and pop album charts for more than 200 individuals, and he sold more than 100 million records worldwide during his lifetime. He was also in many TV and movie spots.

Kenny’s entrepreneurial ventures went far beyond music. Kenny partnered with a former CEO of Kentucky Fried Chicken to create a restaurant chain known as Kenny Rogers Roasters. According to an article by The Wealth Advisor at its height, there were 425 restaurant locations. Eventually, the restaurant started failing and was bought by “Nathan’s Famous Inc.” in 1998 (know when to fold ‘em, remember?). It was later sold again to an Asian company and there are still open locations in Thailand and other parts of Asia. But here’s where Kenny screwed up: when he sold to Nathan’s Famous, he gave them the right to use his name. They sold those rights to the Asian company that is still using his name in the locations in Asia. Because Kenny sold the rights in 1998, he didn’t hold on to ANY licensing rights for the use of his name. When it came to the rights to his name, he sure should have “known when to hold ‘em”. With a bit of business acumen or some good advice, Kenny could have charged a licensing fee for the use of his name and his heirs would still be getting paid today.

While Kenny may have messed up that one, there are still a lot of assets to his estate. Kenny wasn’t the writer on most of his hits, so he doesn’t have writing credits for those songs. Sure, there are still royalties when his songs are played, but not nearly as much as there would be if he was a co-writer. Regardless, he owned a gigantic mansion on an 18-hole golf course that he designed, which has already been sold for around $4.4 Million.

Kenny was still married to his fifth wife at the time of his passing, but he had four ex-wives and five adult children. He toured all the way up to 2017, and he always made money because he could still pack the house. But, when he stopped touring, he started selling real estate and other assets to finance his standard of living. When Kenny divorced wife number four in 1993, he paid out $60 million in the divorce settlement! Estimates are that was half of his fortune back then. I’m sure that’s why he kept touring until he couldn’t do it anymore.

Kenny had two children with his fifth (and final) wife, and children with his previous wives as well. Wanting to take care of his widow, as well as the children from previous marriages, makes Kenny’s estate plan ripe for a QTIP Trust. Why? Because a QTIP trust makes for Trust property as payable to Kenny’s widow, for the duration of her lifetime, and at her death, the remaining trust funds are paid out to Kenny’s chosen beneficiaries, which we would assume would be his children. Why is this necessary? Well, if Kenny died and left everything to his wife, and she died leaving everything to her and Kenny’s two children, the three previous children would be excluded. If we assume that Kenny wanted his estate to benefit ALL of his children, the QTIP Trust makes sure it happens.

Kenny would leave his estate to the QTIP Trust, which would specify his widow as the beneficiary for her life, but at her passing, the five kids could be equal contingent beneficiaries. His wife could maintain her current standard of living he couldn’t be cut out.

We recommended the same thing in the case of Eddie Van Halen’s estate, for the same reason. You can read about his estate, here.

We also hope that Kenny had his Big 3 documents in place, as well as estate tax protection Trusts.

His estate has been involved with some litigation when a previous employee was attempting to sell a DVD with footage from Kenny’s last tour. The estate spent nearly $300K in legal fees to stop the DVD release and is now suing for damages, according to TMZ. The estate doesn’t want the employee to release the DVD because they plan to release their own farewell tour project. While this might look like a sad attempt to cash in, even more, Kenny’s last wife was only 57 when she died, with two kids, so I don’t blame her for wanting to get whatever money she can – I’d want my wife to do the same exact thing.

No doubt that Kenny Rogers was a legend. His list of songs includes Through the Years, We’ve Got Tonight, and You Can’t Make Old Friends (with Dolly Parton). Here’s a great YouTube tribute with what they consider his top 20 hits.

You don’t have to be rich to take advantage of QTIP Trust. If you’re on a second marriage (or a fifth, like Kenny) and you want to make sure your children from a previous marriage are taken care of, a QTIP Trust will accomplish that.

To learn more about when to use Trusts, and when NOT to use them, download our free report “5 Trusts That Can Wreck Your Estate Plan”. The report will tell you the most common mistakes by Estate Planning lawyers that don’t know what kinds of Trusts to use and when to use them.

It’s a common mess that we spend a LOT of time cleaning up for other lawyers.