I Got a Feeling that Brown's Estate Drama Isn't Over Yet! 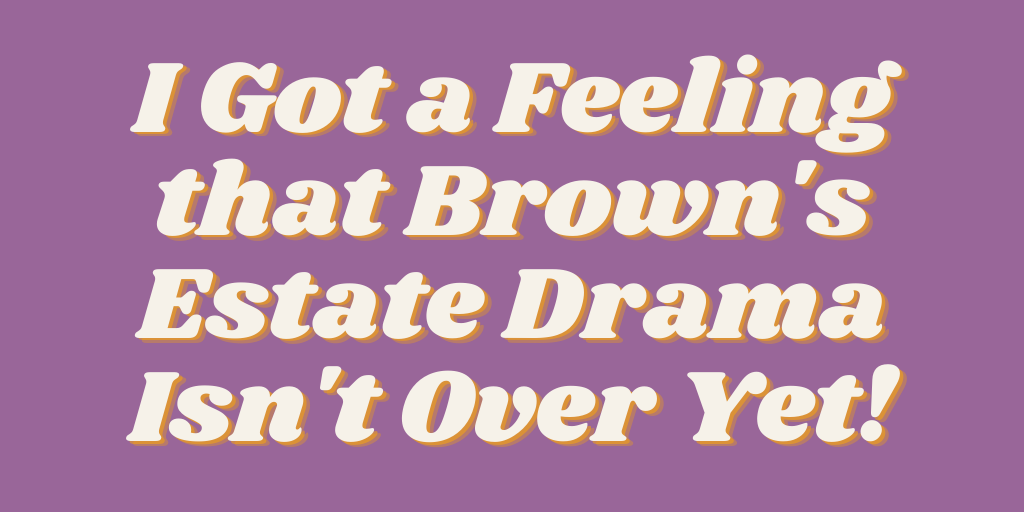 We all know the beloved Godfather of Soul, James Brown.

What we all don’t know is how messy his estate really is!

James Brown passed away when he was 76 on Christmas day 2006. Even though his death was 14 years ago, the battle over his estate is still going on. Brown was a well-known musician with many hits including, "I Feel Love", "Man's World", and "Get up offa that thing".  Due to drug problems and financial issues, his large estate began to dwindle. The exact worth of his estate is still unknown but it is believed to be anywhere from $5 million to $100 million. The exact worth of the estate could still take years before being determined.

Over the years, many people have filed lawsuits in hopes of dipping their hands into his estate. As the estimated amount of the estate increases, more people are filing lawsuits in hopes they are entitled to something. Most recently, his “wife”, Tomi Rae Hynie, is looking for her share. The reason I say “wife” here is because they were never really married! Hynie failed to annul a different marriage before getting involved with Brown, making them partners rather than officially husband and wife. What does that mean? It means that she does NOT have any rights to his multimillion-dollar estate! I am sure we all recall that iconic scene of Hynie not even being able to get into Brown's house after he passed - you know, the house she was living in! What a messy situation.

This would not seem like a chaotic estate, but rather straightforward now that she has no rights, right?

In 2009 a South Carolina attorney, Gov. Henry McMaster, took it upon himself to settle Brown’s estate. After reading Brown's Will, his ruling was that half of Brown's estate goes to charity, which was Brown’s dying wish, another quarter is given to Hynie and the rest could be split between his children. This seemed like a solution, but of course, not everyone was happy with the outcome. By 2013, this ruling was overturned by the chief justice of South Carolina's Supreme Court. It was believed that Brown’s real wish of most of his money being donated to charity was not followed. Since Brown was in a sound mind during his Will signing, this wish MUST be followed. McMaster’s ruling went out of the window. That meant trouble for Hynie, who no longer got her share of his estate!

With the no longer valid and the recent news of her not being Brown’s real wife, it was a clear-cut case. Earlier this month, the court finally came to a decision. All five justices had ruled unanimously that Hynie was not legally married to Brown. It was determined that Hynie has no rights to Brown's estate and that the wishes of Brown must be followed. In his will, Brown wanted to create an “I Feel Good Trust” which would use his music royalties to fund educational expenses for needy children in South Caroline and Georgia.

Seems like a better use of the money to me!

Even with the latest ruling, this estate battle is far from over. It is believed that Hynie is going to fight this latest ruling in hopes she can steal back part of Brown's Estate. This legal battle could go on for many years to come.

Unfortunately, this is not the first celebrity estate battle that has lasted for years. Even when the celebrity leaves a Will, relatives often go through long, expensive legal fights to get bigger shares or even overturn the Will. If they do not have a Will at the time of passing, it is an even bigger fight! For example, Prince died with no Will and the legal battle over his estate is nowhere near an end! His multi-million-dollar estate is still up for grabs since he did not lay out his wishes. Want to learn more about Prince and what’s going on with his estate? Read our blog on that here!

Even if you’re not a celebrity, you can learn from them!

Learn from Brown and Prince and leave your money exactly where you want it!