I would do anything for an estate plan. 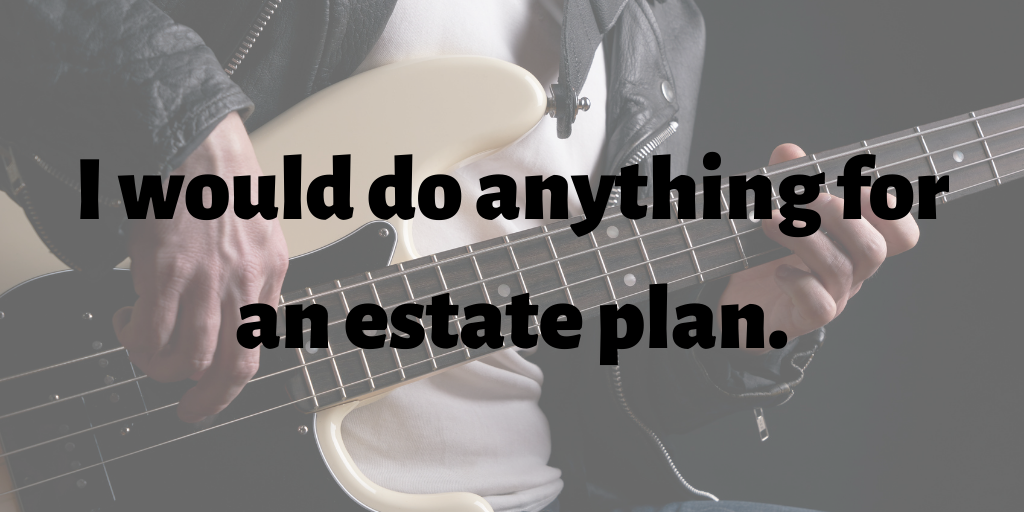 This was an interesting guy. He's been around forever and there aren't very many people that haven't heard his music. Meatloaf is best known for hits like “Bat out of Hell”, and the long but never gets old hit “Paradise by the Dashboard Lights”. I've heard it sung at countless weddings and people love to get out on the dance floor and do their own little version of the song.

Meatloaf’s real name was Michael Lee Aday. He was asked about how he got his nickname and often said that he was called “Meat” since he was a little kid, and the “loaf” was added when he was around 12 years old. Apparently, according to this article, he stepped on his coach's foot, and his coach yelled at him to “Get off my foot, you hunk of meatloaf!”. From there, the original nickname meat changed into Meatloaf and it stuck.

Along with his music and hit songs like “I Would Do Anything for Love But I Won't Do That,” he also acted in musicals and movies. Meatloaf was cast in the Broadway musical “Hair” when he was a young man. He also had small parts in movies like Wayne's World and Fight Club.

Like we often do with our blog, we like to talk about celebrity estates and what they could do or should have done to protect their families. While we don't know much yet about Meatloaf’s estate, we do know that he had two marriages. Meatloaf’s first wife was Lesley G. Edmonds. She worked as a secretary at a studio where Meatloaf recorded, and the two were married within a month after the meeting. Leslie had a daughter named Pearl from a previous marriage who Meatloaf later adopted. A few years later, they had their child Amanda, who went on to be a TV actress herself. Meatloaf and Lesley divorced in 2001.

In 2007, he married his second wife, Deborah Gillespie. He did not have any children with his second wife, and he was married to her until his death. Meatloaf was a big sports fan and he participated in lots of celebrity sports fundraisers, like golf and hockey. His philanthropic efforts were well known.

Since we don't know much about his estate yet, we can talk about what we hoped he had in place.

I'm not saying that to impugn her in any way; we are just talking about this as an example. If Meatloaf had children with his second wife, then she may have been even more predisposed to keeping his estate for the benefit of her children and again, excluding children of the previous marriage. Again, there is no evidence of this whatsoever, and we are only talking hypothetically. Had he come to see us, this is a planning tool we would have recommended.

Money can do strange things to people. And when we are talking about estate planning, we are engaged in the world of “what if”.  It's my job to look at the worst-case scenario. Now, the worst case doesn't always happen, but I have seen money bring about the absolute worst in people. I have seen money make people act in a way that no one would have ever guessed that that person would act. So, in this situation, if Meatloaf wanted to make sure that he had protection for the children of his first marriage, while still leaving assets to his current wife, he could do that using a QTIP Trust.

With the QTIP Trust, he could make sure that his current wife had assets and money for her entire lifetime. But that when she passed on, the shares would have to go to the children of Meatloaf’s previous marriage. If he had had children, with the second wife as well, the QTIP Trust could be drafted so that the children of both marriages would share in what was left. But what the QTIP prevents, is his current spouse from assigning her wealth at her death or through her own estate plan in such a way that would exclude the children from Meatloaf’s first marriage. The QTIP Trust provisions require that after the current spouse’s passing, the funds go in accordance with the trust terms and not to his current wife's estate.

Because Meatloaf was well known for supporting charities, we might also recommend to him a Charitable Trust.

In a Charitable Lead Trust, the trust provisions might create a stream of income that is paid to a charity for a set amount of time and then after that time lapses, the trust fund is dispersed to family members. The more popular option is a Charitable Remainder Trust where the trust provisions allow for the trust assets to be used for a family member during their lifetime, but then at the passing of the beneficiaries, the remainder of what is left in the trust goes to a charity. In addition to helping the charities themselves via donation, these trusts can help with estate taxes. There are deductions allowed for donations made to charity, including donations made to these charitable trusts, and these deductions can reduce your taxable estate and help cut down on estate taxes.

The circumstances around Meatloaf’s death are sad because they are a reflection of the crazy times that we are living in now. At the time of his death on January 20, 2022, Meatloaf was living in Nashville, Tennessee. Right now, although there has not been an official cause of death released, the word is that meatloaf died of COVID-19. While we know that Meatloaf was against the wearing of masks, it was because he felt they were not effective and not because he was worried about encroachment on his freedom. We don't know whether he was vaccinated but he did say in an interview that he was scared to death of COVID-19. It’s a sad commentary on the last few years, as covid has taken so many people away from us.

For me, I'd rather think of him off somewhere, living in Paradise by the dashboard lights. Rest in peace.