Larry King's Estate: Does His Almost Ex-Wife Get It All? 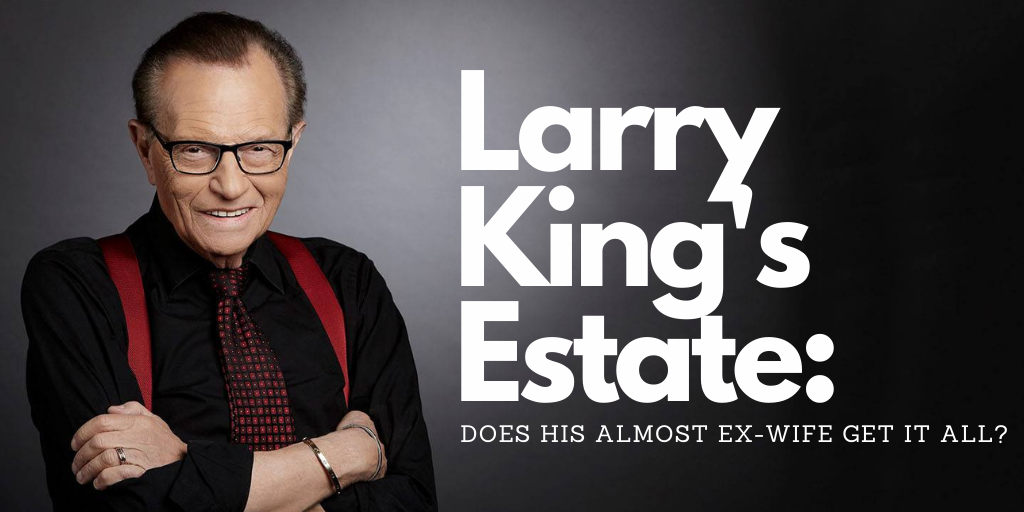 Many of us remember Larry King as a CNN talk show host who became iconic due to his interviews with numerous celebrities, politicians, athletes, and everyday people. He was known for asking probing questions that he knew the viewers wanted answers to. He became famous thanks to his hit show, Larry King Live, which aired on CNN. King was a journalist at heart and a very successful talk show host. Sadly, Larry King passed away on January 23rd, 2021. He was 87 years old.

King was hospitalized in December due to COVID-19. He has battled a number of health problems over the last few years including heart attacks, bypass surgery, and cancer. These underlying health issues caused COVID to hit him hard, and King was admitted to the ICU for treatment. He was recently released from the ICU after beating COVID, but ultimately, he could not overcome an unrelated infection and passed away due to sepsis. It was reported that his last words were "I love you, take care of the boys" to his (almost ex) wife, Shawn.

King was first married when he was 19. He married his high school sweetheart, Freda Miller in 1952. After that, he married Annette Kaye who is the mother of his son Larry King Jr. However, that marriage did not last long and was annulled. His next wife was his wife twice! Alene Akins, a famous PlayBoy Bunny married King in 1961, they were divorced in 1963 and remarried in 1969. If you thought that was confusing, also in 1963, right after his THIRD divorce, he married Mary Francis Stuphin. Obviously, that did not work out since he remarried Alene. But the second marriage to her was a failure, just like their first, and by 1976 King had a 6th marriage and a 5th wife, Sharon Lepore. They wed in 1976 and were divorced by 1983. As if 5 wives weren’t enough, he went on to have 2 more. His 7th marriage was to Julie Alexander and they were married in 1989 and divorced 3 years later. His last wife was Shawn Southwick, and they were married in 1997. They did file for divorce in 2010 but stuck it out until 2019 when they filed for a second time, but the divorce was never finalized.

Having all these wives came having multiple children!

Larry was a father of five children. His children are Chaia King, Larry King Jr., Cannon Edward King, Chance Armstrong King, and Andy King. Tragically, King lost two of his five children. Even more tragic, he lost both of these children within weeks of each other. Chaia King passed away after battling lung cancer, a disease in which Larry successfully beat himself, and Andy died of a heart attack. Both of these deaths happened in August of 2020.

With this many wives and children, Larry King needed a solid estate plan to keep his multi-million-dollar estate in place, but unfortunately, he did not plan right. At the time of his death, Larry was paying spousal support to his last wife, Shawn, as part of a prolonged divorce negotiation. Now, she is in the position to inherit all of his assets! At the time of his passing, Larry King’s net worth was estimated at $50 million, which means Shawn is getting all of that. Since King passed before finalizing his divorce, Shawn can probably get her hands on all of his assets, unless his Will says otherwise.

There is also the issue of King having five children with different women, and two of which died just a few months ago. There is a very high chance that the deceased children’s names are still in his Will, which causes problems.

In some states, children can file for what’s called a “forced share” if Larry had no Will. Basically, unless there is a valid will where he disinherits the kids, they could still try to get a piece of the pie. In the absence of a Will, the state already has an estate plan ready for you, called the “laws of intestacy”. Those laws could provide for some inheritance to the children, and if not, they could try to seek some part of the estate through the forced share laws, which basically say that if a child isn’t specifically disinherited, they could “force” the estate to grant them a share.

The smart thing would have been for Larry to set up a proper estate plan, and leave money in Trust for the kids. With the right kind of Trust, Larry could have provided for his wife (if he still intended to do so) and make sure she couldn’t then disinherit the children of previous marriages. The right estate plan could have solved all of this. Now, if the children are cut out, and they decide to litigate or seek a forced share, there go the estate funds, to pay lawyer fees and court costs. It’s so much better to do it right from the get-go.

The death of Larry King was another shock and a tough start to 2021, a year in which we all hope is better than last. Speaking out on his father’s death, King Jr, said: “What we can all take away from our father’s last time with us was his love of life”. Just as King Jr. said, we should remember Larry King’s love for life and embrace that while going forward into 2021.

To prevent your estate from going to an ex-wife or people you don’t want it to go to, the key is to plan ahead.

Learn how to do just that by reading Mike’s book Planning Ahead, which you can download for free here!

Update: Larry King had a Holographic Will!!!

First, what is a holographic Will? It’s a Will that you write yourself, on paper, without a lawyer, and usually without the state-mandated requirements for a valid Will, such as witnesses and notary stamp. For example, in most circumstances, Massachusetts does NOT recognize holographic Wills.

According to a news article on aol.com, Larry wrote a handwritten amendment to an existing Will. In that amendment, Larry removed his not-quite-ex-wife and left his entire estate to his 5 children. Larry’s wife Shawn has already stated that she will be contesting this Will!

There are several reasons that could be used to contest a Will, for a few examples:

- The Will wasn’t drafted in accordance with state law (such as holographic wills in Massachusetts).

- The signor did not have the sufficient mental capacity to understand what he was signing.

- The signer was acting under duress or undue influence of another person.

We don’t yet know what grounds that Shawn will use in her Will contest. Some states DO recognize holographic Wills, but there still could be issues with a handwritten version. For example, we had a client with a handwritten Will that wouldn’t be allowed by a Massachusetts court, but in Florida, where he also owned property, the Will WAS accepted as valid!

An additional complication is that two of Larry’s children passed away last year, yet they were named in this handwritten Will. Yet another reason why you HAVE to UPDATE your estate plan when there are changes in your life!! The lesson to learn is that you want your estate plan done RIGHT, but you still need to update it based on changes in your life!!

We will keep our eyes on this developing legal battle!

by Nicole Rego [email protected]
Connect with me
1 Comments
by Steven Gonzales April 17, 2022 at 05:40 AM
Post a Comment