Are Your Beneficiaries Up-to-Date On All of Your Accounts? 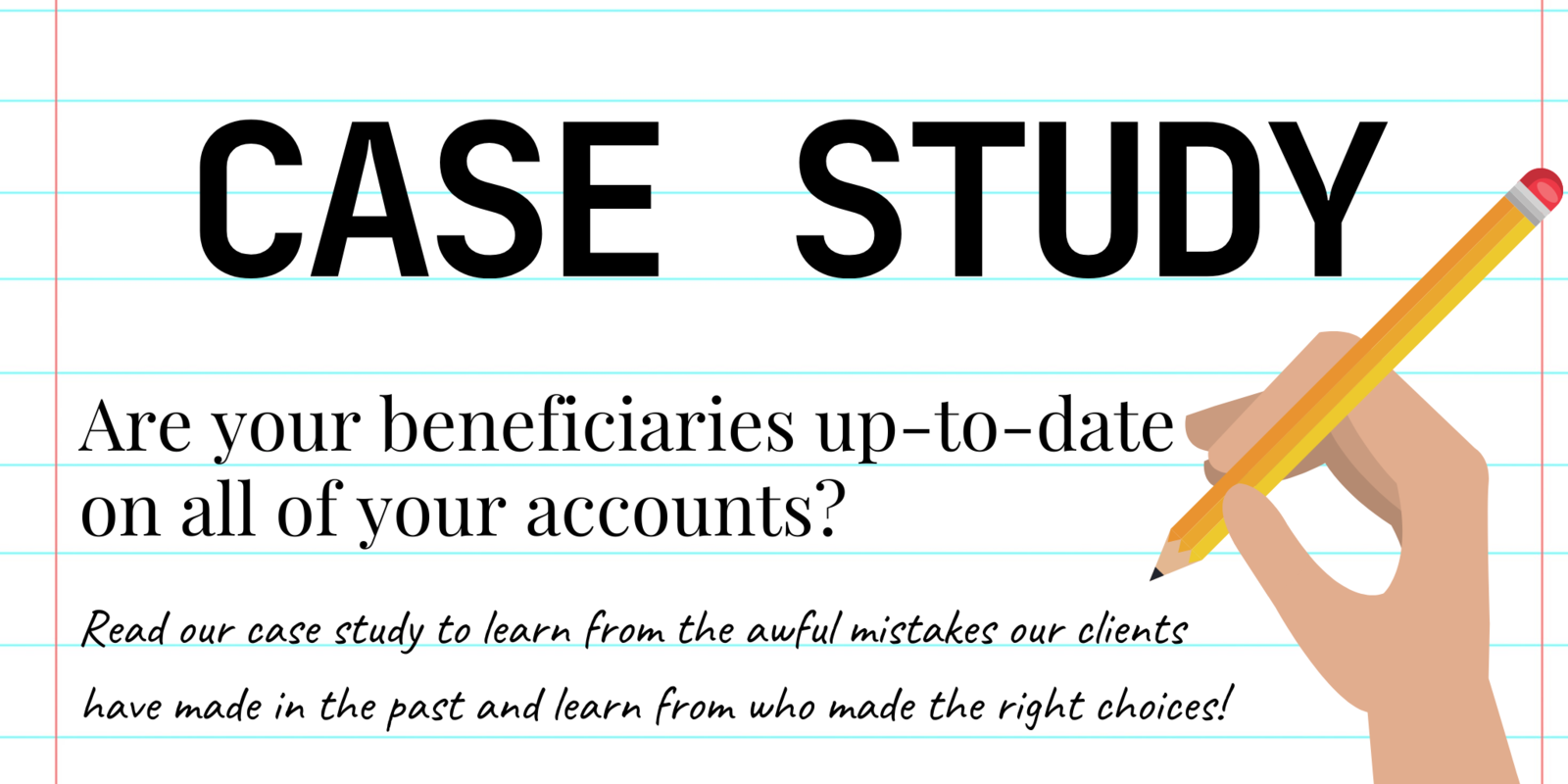 Talking with your estate planning lawyer once per year is crucial, especially when major life changes occur. When meeting with an estate planning lawyer, there should be a discussion of your beneficiaries, taxes, and overall finances - life insurance, bank accounts, retirement accounts, and investment accounts. Just as important as your finances, your overall concern and goals should be heard as well.

When meeting with my clients, I remind them to check the status of their named beneficiaries. Making updates is easy! In most cases, it’s as simple as filling out a form online. You must have primary and back-up beneficiaries. Some people haven't checked who their beneficiaries are in such a long time. They then find their parents named on their policies even though they passed years ago. I've seen many more real-life examples where beneficiaries were not updated, and things went very, very wrong. Here are three stories:

Client 1: This is about a client that came to see me about probating his mother’s estate. During the probate process, I hounded him to get his estate planning and beneficiary designations in order. He had a blended family - children from two different marriages, and he was separated from his current wife. They were living apart and planning for divorce. As much as I bothered this client, he did not want to deal with his planning until his mother’s estate was settled. He was in his fifties and assumed he had plenty of time. Do you have an idea of where this story is going? Sadly, he passed away suddenly without warning or known illness. The crazy part is he came to my office to sign documents for his mother’s estate on a Friday, and his family found him over the weekend deceased. He never did a Will or updated his beneficiaries. His wife that he had been separated from for over a year was named on everything - the house, the life insurance, and his retirement accounts. All of his assets added up to almost $1 million in total, and she will get every dime of it. My client had one child from that marriage, but he also had two older children from a prior marriage. These poor two kids received nothing of their father's and are now considering litigation. This process will be time-consuming and hugely expensive. My client's wife, that was his soon-to-be ex-wife, got every dime that he spent a lifetime accruing. You see, this could have been easily avoided with a Will and with an update to beneficiaries.

Client 2: I had a client who was sick with cancer who knew it was incurable, and that she had maybe a year left to live. She was very young, only 53 years old. She had been battling cancer for a while and wanted to get her affairs in order. Since she had a falling out with her mother, she wanted to make sure her mother did not inherit ANYTHING from her estate. Originally, she didn't even want her mother to attend her funeral services, but over the last year of her life, they mended fences enough that she decided to allow her mother to attend. I did my client's estate plan, and I nagged her over and over to make sure her beneficiaries were up to date on her accounts. She thought everything was all set, and told me so, but what she didn't tell me was that she never actually confirmed it. Sadly, she lost her battle to cancer this year, and we are now handling her probate matter. Come to find out, she never confirmed who her beneficiaries were and she still had her estranged mother listed. Her mother received her retirement account that had a balance of over $600,000! She didn't want her mother to receive anything, and instead, she got a lump sum of money, and there is nothing I can do about it. The other beneficiaries will get close to nothing, and neither will the charities she wanted to make gifts to. Filling out that simple piece of paper could have fixed it all.

Client 3: Sadly, I had another client who had cancer. She too knew that she was not going to be cured, and wanted to get her estate planning in order. Her goal was to make sure that her husband and family did not have a difficult road after her passing. We did her estate plan, updated all of her beneficiaries, and made sure all of her accounts were covered. Unfortunately, she also passed away this year. Her husband called me a few weeks later and asked, “What do I have to do about my late wife’s estate?”, my answer was, “Nothing. Not a thing.” She had her estate plan completed, she updated her beneficiaries, and because of the steps she took, we don’t have to file probate for her. Her husband will inherit her accounts without any fuss, and at the same time, I saved them over $100K in estate taxes in the process.

The difference between these three stories is obvious. The moral of them is to make sure you update your beneficiaries on ALL of your accounts. It’s simple, easy, and makes an absolute world of difference.

Now, please put yourself in these three clients' shoes. Which one would be your story if there were no tomorrow? The unexpected can happen at any moment, so don’t take a single day for granted. Call (978) 657-7437 to book your Strategic Planning Session today or visit BookMyPlanningSession.com.

To learn more about the importance of updating your beneficiaries to match your estate plan, read the article we shared from ElderLawAnswers.com, here!