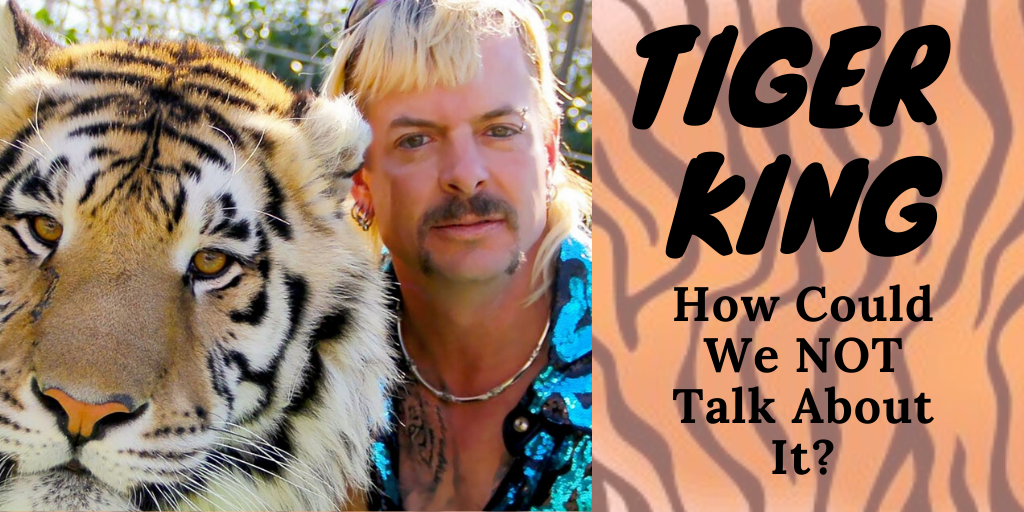 How can we not talk about Tiger King?

Most of the time I stared at the TV screen mesmerized. If you haven’t seen Tiger King: Murder, Mayhem, and Madness, you’re missing out! Here is a trailer to get the gist of what this wild show is about (pun intended).

So here is the basic outline for those of you who don’t know: Joe Exotic owns an exotic zoo where he has over 200 tigers, plus an array of other animals that he loves and adores. Carole Baskin is a woman Joe despises (cue his song “Here Kitty Kitty”), mainly because she is an activist for big cats, and believes that Joe should not own any of the tigers or other animals. Carole is an activist, but definitely not a saint! As the series unfolds, the plot grows into this crazy story of Joe, his friends, his enemies, his animals, and his lovers. Carole’s story of course also unfolds, and just when you think things couldn't get any weirder, they do!

The weirdest thing about Carole though, her husband, Don Lewis, just “disappeared” one day. Of course, Carole was able to keep all his money and leave little to nothing for his children. Ya, disappearing then leaving the “other woman” with your life’s earnings over your children makes plenty of sense! It’s not like Carole Baskin fed her “missing” husband to her tigers....that would just be too crazy, right?

With all these stories going on, I could not look away, I could not stop moving onto the next episode because I couldn’t wait to see what crazy thing would happen next. I mean what else am I going to do while sitting at home? Binge Netflix of course!

As I watched the series, the Estate Planner in me noticed FOUR major mistakes that were made by multiple people in the show. Here are some planning lessons you can learn from Tiger King: Murder, Mayhem, and Madness:

1. Make sure you have more than one copy of your estate planning documents and that your lawyer has the up-to-date version. During the series, we learned that Don Lewis was worth millions of dollars. Before his disappearance, he was (unhappily) married to Carole Baskin. Either he flew away somewhere in his plane or Carole fed him to the tigers, but Don was never found. He was finally pronounced dead after a few years of being missing and Carole inherited ALL of his riches. His poor daughters and his first wife got about 10% of his wealth. How did Mrs. Baskin pull this one off you may ask? The series hints that she removed a steel lockbox that contained the originals of Don’s most updated version of his will from his office. Let’s just say that version wasn't seen again. You see, Don was preparing to leave Carole, even tried filling a restraining order on her. So, when it was time to file probate, Carole submitted the old will that stated almost everything was hers.

What mistakes did Don make? He should have DESTROYED the old version after he made a new Will. Also, his lawyer and his family members should have had up-to-date copies of his Will.

Learn more about the big three most important documents in estate planning here!

2. Update, Update, Update! If Don wanted to change his will or other documents, it was his responsibility to do so. I mean, no one ever expects to be fed to a group of tigers, but ALWAYS be prepared for the unexpected! At our firm, we preach to our clients that we are not a one-and-done kind of place. We make sure we are communicating annually with our clients and always helping them out when they need an add or a change. If Don’s lawyer practiced how we preach, then Don would have been taken care of. Instead, his inheritance was given to a woman who stole a whole lot from his daughters.

3. Do not sign your property over to someone else, unless you are selling it to them for fair market value, or there are other extenuating circumstances. In Tiger King, Joe exotic transferred his property over to Jeff Lowe (another tiger fanatic), as a way to keep the property safe from liability. However, Joe still considered himself part owner of G.W. Zoo and would run the Zoo equally with Jeff.  Although, Joe’s actions finally caught up to him, and is now spending his future years in federal prison. He insists that Jeff stole the property out from under him. I read an article about where everyone in the series is today, and it stated that Jeff is still the owner of the Zoo. If you’re interested in knowing what everyone is up to today, you can read that article here.

We encounter similar circumstances where we have clients asking to transfer their home to someone else. Whether it be their children or another family member, people ask to do this so their home is protected from Medicaid and nursing home liens. In most cases, this is the exact WRONG thing to do! All they need to do is move their property into a properly drafted Medicaid Trust. This will accomplish the same goal but without the risk of transferring property to someone else or putting someone else’s name on your house. When you add someone else’s name to your deed, their liabilities can become your liabilities.

4. Always back up your work! Rick Kirkman was a TV producer who was making a reality show about Joe Exotic's life and lost about FIVE years' worth of video footage that was destroyed in a fire. No one knows exactly who started that fire. Was it Joe, Rick, or Carole? That's a theory you can decide. The series shows Kirkman devastated. John Finlay also lost something precious to him. No, not his teeth - his beloved gators! Anyway, the point I am trying to make is that if Kirkman backed his work up to multiple places, all his hard work could have been saved. Instead, he got in his car and drove away with absolutely nothing to show.

So, there you have it, four estate planning lessons we learned from Tiger King. If we did your estate plan, and you are due for your annual check-in, call the office to set it up. We are 100% up and running. While we are not having face-to-face meetings during this time, we can accomplish what we need to by phone or by video call. If you need to update your estate plan because your documents are old and out of date, call the office to schedule a Strategic Planning Session or go here to learn more about our Strategic Planning Session on our website. You can even book your appointment online at BookMySession.com. For the criminal law aspects of Joe Exotic's Case, click here.

Get your documents in order. You do not want to end up like Carole’s husband….trust me!

Want an update on all the Tiger King drama?