An Unexpected Death And An Estate Left Behind 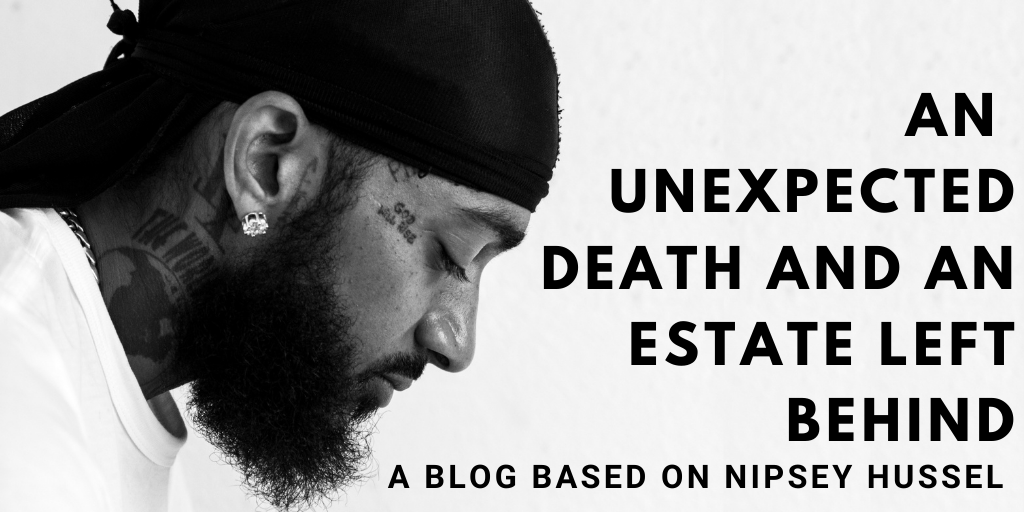 Nipsey Hussle passed away in March 2019 unexpectedly at the age of 34.

He was shot and killed outside of The Marathon Store by Eric Holder (allegedly), who was indicted by a grand jury in May 2019. Holder’s trial has been postponed due to the COVID-19 pandemic, and he is set to have his next hearing on January 2021 according to New York Daily News. Nipsey was a two-time Grammy rapper and was on the rise before he was murdered. Nipsey was buried at Forest Lawn Memorial Park. His celebration of Life held at LA’s Staples Center was attended by over 21,000 fans and mourners.

It was only recently that we learned the final amount of Nipsey’s estate. His total estate was deemed worth $4,169,088.57 according to TMZ. According to legal documents, it has been reported that most of his estate net worth comes from his trademark portfolio and some personal jewelry items. His estate net worth was also deemed high thanks to his trademark portfolio which includes his name, signature, voice, and likeness on or in products or goods. This portfolio alone is worth $913,000 according to TMZ. It is also reported that his portfolio will only increase in value as Nipsey’s legacy lives on.

Nipsey also owned a 25% share of stock in The Marathon Clothing Brand which is now valued above $270,000. He had a 100% interest in “All Money In No Money Out, Inc.” which is worth over $2 million today. With all these assets, it has been reported that Nipsey did not own any real estate or property of his own. There is a possibility that he owned buildings and assets through some of his ventures, but that still remains unclear.

As some of you may already know, Nipsey was a father of two. Nipsey was granted full guardianship over his daughter, Emani Asghedom who was 12, following a custody dispute and he had joint custody with Lauren London for his son, Kross Ermais Asghedom, who was 4.

Since Nipsey’s death was unexpected, he did not have the right documents prepared. He failed to named guardians for his two children and he also did not have a Will. As a result, a judge had to pick who would have legal guardianship over both of his children. While guardianship of Kross was not an issue and went to his mother Lauren London, the guardian of his daughter was a harder decision. His daughter, Emani, had been living with Nipsey’s sister Samantha Smith after his passing. Samantha filed for guardianship, but so did the child’s mother Tanisha Foster. This led to an extensive battle over custody that went on for over 6 months - the legal bills must have been astronomical. In the end, Nipsey’s sister won the battle and she along with Nipsey’s mother are the legal guardians of Emani. All of this could have been avoided if Nipsey had a Last Will that designated his preferred guardians.

The lack of his Last Will with guardianship provisions created the issue of wondering where his estate would end up. According to California Law, it states that in the absence of a Will, that money must be split equally between the children. Since Nipsey had no Will, his estate will be split between his two children, but since his children are minors, they are ineligible to access their inheritance until they reach the age of majority. During that time, the guardians will have access to the funds, and it is up to the court to decide how much oversight if any, they will have in monitoring the money's use. There is very little to guarantee that the money will actually be used on or for the kids.

Since there was no Will, Lauren, the mother of Kross, had to petition the court for approval to be the guardian of Kross’s share and manage his inheritance. She was granted permission and now will control his half of the finances. The other half of his finances that go to his daughter Emani Asghedom will be controlled by his family, who also had to petition to be the legal guardians of her estate. Both children are expected to receive just over $2 million each, as well as future earnings of the estate.

A little bit of estate planning could have saved a ton of money for the children.

The key is to plan now and avoid the fight and expense of what comes later when there is no plan.

To avoid a situation like Nipsey's, make sure you are prepared for the unexpected. Set up your Strategic Planning Session with us today to begin your estate planning. You can schedule your session by giving us a call at 978-657-7437 or by booking an appointment online at BookMyPlanningSession.com!