Pruitt gave up his life but did he give up his assets too? 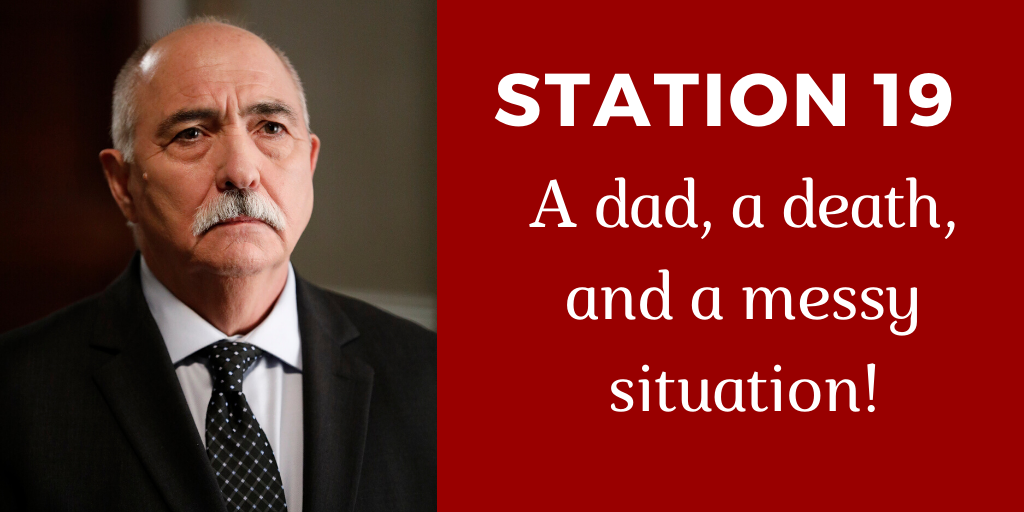 **This blog contains spoilers for Station 19!**

We’re still not over the death of Pruitt. I mean how can we be?!

For those who don’t know what I am talking about, let me give you a bit of a backstory.

Captain Pruitt Herrera was a retired fire Captain. His daughter, Andrea, is a firefighter for Station 19 - his old station. During this past season, a really dangerous fire broke out in a storage unit facility. The firefighters, all from Station 19 of course, on the scene could not ventilate the roof of the building because it was unstable. If someone stepped on the roof, it would collapse, and the person ventilating would die. That means all the smoke from the fire was staying inside the building since there was nowhere for it to go. This becomes even more dangerous for the firefighters because as we all know, smoke can be more deadly than the fire itself!

Pruitt, the retired Captain, was in the firehouse during the time of this fire. He heard the call about the fire and ran to the scene, knowing his daughter was there. All the firefighters inside, including his daughter, were at risk of dying because the smoke had gotten so bad. With the building being a storage facility, it became hard for the firefighters to see where they were going and more importantly, hard to see the exit. Pruitt with all the years of experience knew exactly what he had to do.

Without hesitation, Pruitt decided that he would be the one to ventilate the roof and save the firefighters inside. He knew what this meant, but for him, his daughter and his old team meant more. Before making his way to the roof he turned to a fellow firefighter and stated, “tell Andrea that every single thing I did her whole life, I did because I love her”. After that he stepped out onto the roof, began bashing at it until he opened it, falling through to his death. He gave up his life in exchange for not only his daughters but his team.

The smoke began to clear away thanks to Pruitt and the firefighters inside we able to find their way out. On her way out, Andrea spotted her father’s baseball hat and knew immediately what he had done for her. It was always just the two of them, and now it was just her.

Her mother was never in the picture during her life. Her father had always said that her mother was very sick and mentally ill. It was always just her and her dad…until it wasn’t! During the finale of this season Andrea went to visit her aunt, only to discover her mother was there, healthy, and in front of her!

I’m sure you know that this show is related to the show Grey’s Anatomy, a show that I hate with every single fiber of my being. My wife and daughter love it, so I try to sit through it with them, rolling my eyes most of the time. Still, I did a blog post about an episode Grey’s (Read it HERE) and this episode of Station 19 had a similar tone and reminded me that there are very important reasons why I do this for a living.

I am not a firefighter. Would I give up my life for my daughter? Without even a second thought, yes I would. But then what? If I stop there, I only did have the job. What happens after I’m gone? As of this writing, my daughter Gabby is 16 (see her interview me HERE) and my son Michael is 15 next month. My wife Jill and I are both 44. Although it is very unlikely that I’m going to die on the roof of a burning building, there are other very real dangers, especially in this age of COVID-19. We have, to date, lost 15 clients to COVID-19. Yes, 15! That is 15 people dead, and 15 families left behind.

That is just from COVID-19 – saying nothing about stroke, heart attack, or Alzheimer's and dementia.

What happens to your children if you were to pass away suddenly? Are they protected? Or will their lives fall apart because they are not taken care of financially, and on top of losing a parent, now they lose their home too?

Well, I am not a firefighter. I probably can’t save you from a burning building. But I can save my family, and yours, from the financial ruin that can come after losing a loved one. How do we do that? Through estate and financial planning.

Because Pruitt was a hero, I am going to assume that he did everything right and that he had all of this in place. If he didn’t, then the consequences for his daughter could be unfathomable. For now, we will go with the assumption that he set it up properly, and was comfortable going to his death to save his daughter.

He saved her life, and took care of her even in his death, and knew she would be taken care of.

We all need to be able to say the same.

Station 19 is beginning to follow in the footsteps of Grey’s Anatomy with all this drama and death! If you’re a fan of both shows, check out our blog on Grey’s Anatomy here. If you want to be sure you’re leaving your money exactly where you want it after passing, start your estate planning now. If you’re ready to plan schedule your Strategic Planning Session with us now. We are offering all of our services in person as well as over the phone or video thanks to our Touchless Legal Services. We want to make the planning process as easy as possible for you!

Don’t leave behind a mess to clean up as Pruitt did!