The Estate Plan We Hope Chadwick Had. 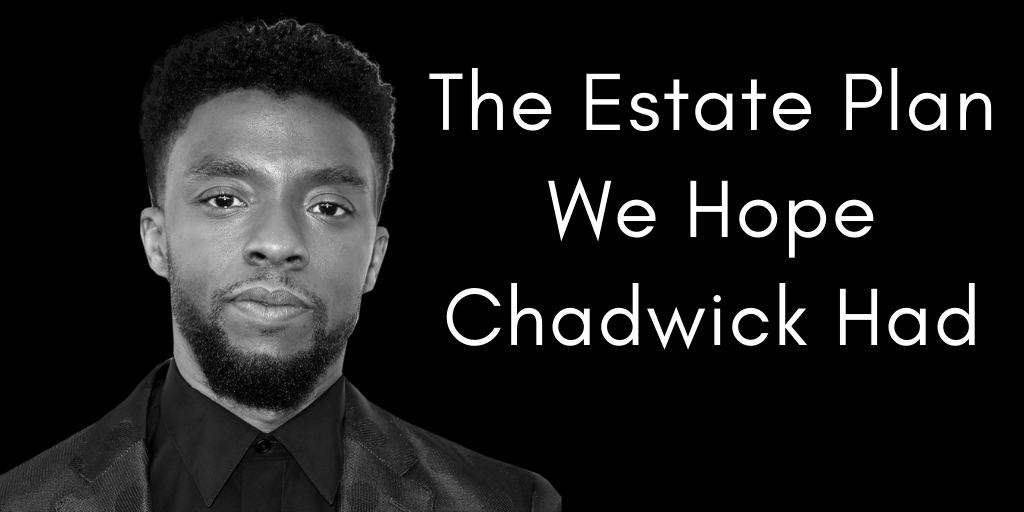 2020 yet again takes another life.

Chadwick Boseman was an inspiration to all, and his passing brought more tears and heartbreak to this terrible year. While his illness was kept a secret until his recent passing, he showed that perseverance is what keeps us moving. It wasn’t until recently that we found out Chadwick had been diagnosed with stage 3 colon cancer back in 2016 and by 2020 it was stage 5. What we did not know was that he continued to act in movies while undergoing chemotherapy, showing just how strong he truly was. While he seemed fine to the public eye, Chadwick was hurting.

Mike’s grandmother actually had colon cancer as well, so this hits home for him. His grandmother fought through numerous surgeries and treatments, and she won that fight. She never showed how much she was hurting, or what it took out of her, like Chadwick. She vowed to be the same person, and do the same thing she always did, even though she was undergoing treatment. She still cooked Sunday dinners, and she never backed down. She was cancer-free in 1996 and lived for another 25 years after that.

Even those who appear to be heroic need to think about their future.

Chadwick’s passing at the young age of 43 shows that people of all ages should start estate planning, especially if there are underlying health issues in their lives.

While we do not know much about Chadwick’s personal life, we do know he was married to Taylor Simone Ledward. He had no children with her, but he did leave behind two brothers and a parent. Chadwick was the youngest of three boys and grew up in South Carolina. He lived in his hometown of Anderson when he passed. At the time of his passing, he was in his home surrounded by his wife and family. From this, we know that he cared for his family, and we are sure that he would want them to be cared for, even after his passing. If Chadwick were to walk into our office back in 2016 after being diagnosed, Mike would have made him an estate plan that would do exactly that.

First Mike would recommend that Chadwick have his Big Three taken care of.

This includes his Power of Attorney, Health Care Proxy, and a Will. Due to the severity of his cancer, it would be important to have all the basics covered sooner, rather than later. If Chadwick were to ever find himself unable to make his own choices, we would want to make sure someone he trusted would be by his side to make them for him. That includes his wishes with regard to life-sustaining treatment, as well as whether or not he would want to be kept alive by machines if he were in a vegetative state.

A Will is also important in this case.

Many times, younger individuals, especially those without children, think they do not need a Will. The truth is without a Will your loved ones will have to go through the process of filing for probate. This is a lengthy process that can cost up to thousands of dollars and years of fighting. Especially in the case of Chadwick, where he made a great living off of his famous roles, the process could go on forever and could cause family drama. The way to avoid all of that is to create a Will explaining where you want your assets going after you pass.

As well all know, long-term care is not cheap and often puts a large burden on families. Chadwick always said he did not grow up rich, but he wasn’t necessarily poor either. He mentioned in interviews that he recalls his mother working long shifts as a nurse and his father working up to three shifts in one day just to provide the comfortable lifestyle he had. After all their hard work proving for Chadwick, we are certain he would want to return the favor and provide for them in their old age. While Chadwick had one parent pass, and the costs of long-term care for his other parent can still be tremendously expensive. Mike would recommend protecting their assets in a trust and possibly transfer their home to trust as well.

Chadwick may have also wanted to donate part of his estate to charity because he was well-known to be a philanthropist. In that case, Mike would also recommend a charitable donation trust. That trust would make sure the money went to the causes Chadwick valued and held dear.

While he will always be remembered for his inspiring roles such as Black Panther and Jackie Robinson, we want to make sure his estate doesn’t end up like his other famous role, James Brown. If you are not sure what I am talking about, read our blog on James Brown’s estate here.

His years were cut too short, but his impact was tremendous. Chadwick used his remaining years he inspired millions through his work, words, and actions.

For an update on Chadwick's estate, read our most recent blog on him here.