Everyone Wants Some Estate Planning 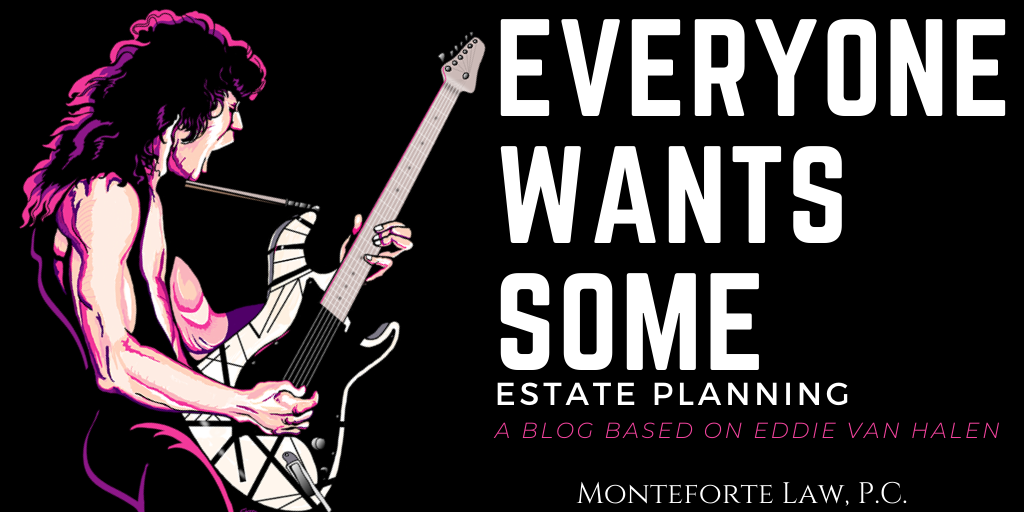 2020 yet again took another life too soon.

Eddie Van Halen passed away Tuesday, October 12th after a long battle with throat cancer. He was only 65 years old. His son, Wolfgang announced his father’s death on Tuesday and said, “he was the best father I could ever ask for”. Wolfgang also said, “my heart is broken, and I don’t think I’ll ever fully recover from this”. This is how most people feel after losing a loved one since it is such a challenging time. (If you too are suffering the loss of a loved one, download our checklist on what to do when a loved one passes for help.)

For those of you that don’t know, Eddie Van Halen was an American musician, songwriter, and producer. He was most known as being the lead guitarist in the American rock band, Van Halen, which he founded alongside his brother, Alex, in 1972. The members of the band included Eddie Van Halen, Alex Van Halen, Mark Stone, and David Lee Roth. Later, Sammy Hagar took David Lee Roth’s Place, and we can debate all day long who was better. Eddie was named one of the greatest guitar players in rock history.

Throughout his career, Eddie and his band Van Halen released dozens of albums, played thousands of sold-out shows, and had numerous number one hits. Eddie even played guitar for Michael Jackson on the “Beat It” track in 1983. He was most known for his guitar solos that featured complex harmonics, wild riffs, and intricate finger work. Mike remembers their cutting-edge videos (maybe second only to the videos by Ric Ocasek and The Cars. You can read our blog on Ric here) and awesome rock ballads, including the video where EVH actually makes the guitar TALK to David Lee Roth. And really, what could be better than “Jump”?

Eddie was also known for having a legendary guitar which he named “Frankenstein”. He created this guitar by combining different body pieces until it looked and played the way he wanted it to. It has since become one of the most known and sought-after guitars in rock history.

Now, let’s get into his personal life.

Eddie was married twice and had one child. He shares his son, Wolfgang, with his first wife, Valerie Bertinelli (you may know her from the 80s TV sitcom One Day at a Time). After 26 years of marriage, the couple divorced in 2007. Upon the news of his death, Valarie wrote on Twitter that her life was forever changed when she met Eddie 40 years ago. She said, “I'm so grateful Wolfie and I were able to hold you in your last moments. I will see you in our next life, my love”.

Despite the divorce, it was clear that Eddie and Valerie remained close, and the divorce was amicable. Eddie went on to marry again, and his second wife was Janie Liszewski. They were married in 2009 and she was still his wife at the time of his death. On Wednesday, October 13th, Janie posted an emotional tribute to her late husband saying, “my heart and soul have been shattered into a million pieces. I never knew it was possible to cry so many tears or feel such incredible sadness”. Valerie, Janie, and Wolfgang were all at the hospital with Eddie when he passed.

Since Eddie knew of his cancer, it can be assumed that he took the right steps in his planning. We hope for his family’s sake that he took the crucial steps in planning for his future. The main three documents we hope he had in place, or what we call The Big Three, are his Will, Health Care Proxy, and his Power of Attorney.

Since Valerie was not his wife at the time of his marriage, it is hard to say whether or not she will be included in his Will. If we had to guess, she probably received money through alimony and his Will only features his son, Wolfgang, and his latest wife, Janie. Since he was married twice and shared a son with his first wife, we hope that Eddie created a QTIP Trust.

So, what is a QTIP Trust?

Isn’t a Q-TIP something you clean your ears with? How does it work? Here is the short answer: with a QTIP Trust, after the death of the first spouse, income and other trust property is paid to a surviving spouse for the duration of their lifetime (or another specified period) and at the death of the surviving spouse, the remaining trust funds are paid out to beneficiaries chosen by the first spouse. If that seems confusing, here’s an example:

Eddie Van Halen was first married to Valerie, and they had a son together, Wolfgang, as I mentioned above. They later divorced, and Eddie married Janie (I think he married her after they release the song Janie’s Crying). If Eddie leaves his entire estate to his wife, as most married people do, then she could simply keep everything and never give a dime to Wolfgang. Do we know if she would do that? Of course not. As is the case with many second marriages, the second spouse isn’t always a fan of the prior spouse or the children of the prior spouse. Eddie and Janie never had kids of their own, but if they had, would Janie be likely to leave all of Eddie’s money to her kids at her passing, and leave out Wolfgang? Well, the QTIP trust prevents that.

How do you ask? We have Eddie leave his estate to the QTIP Trust. The Trust specifies that Janie, his surviving spouse, is entitled to the income that the trust generates, and the Trustee of the trust can make sure Janie has everything she needs to maintain her health, education, maintenance, and support – in other words, her current standard of living. Here’s where it changes things: Janie does NOT have the right to leave the trust funds to anyone else when she dies. Instead, Eddie would specify that the trust funds would go to Wolfgang once Janie passes away. If he’d had kids with Janie, he would direct that those children share with Wolfgang, and therefore he couldn’t be cut out.

There are estate tax benefits to QTIP Trusts as well, but that’s an added bonus. The real benefit is protecting the inheritance of the kids you have prior to your current relationship so that they can’t be excluded.

While not a lot of information is public about his estate, these are the main documents we at Monteforte Law, P.C. would recommend to Eddie and his family. These documents would prevent probate of his estate and save his loved ones thousands of dollars.

Planning for the future is not just for celebrities. Everyone should have a plan in place, especially in today’s world. With the unexpected happening every day, do not leave your estate up for grabs. Start planning for your future while you still can. To get started on your planning, book a Strategic Planning Session today or call us at 978-657-7437 to learn more. If you want to learn more about estate planning as a whole, download Attorney Michael Monteforte’s book Planning Ahead.

Want to watch Attorney Michael Monteforte talk about Eddie Van Halen and the impact this rock legend had on his life? Watch our YouTube video on Eddie here, then be sure to subscribe to our YouTube channel to stay up-to-date on celebrity estates.

After this tragic death, we know Eddie Van Halen will live on through his loved ones and the songs he created. He is a legend and we hope he rests in peace.