There Is Nothing More Powerful Than A Good Estate Plan 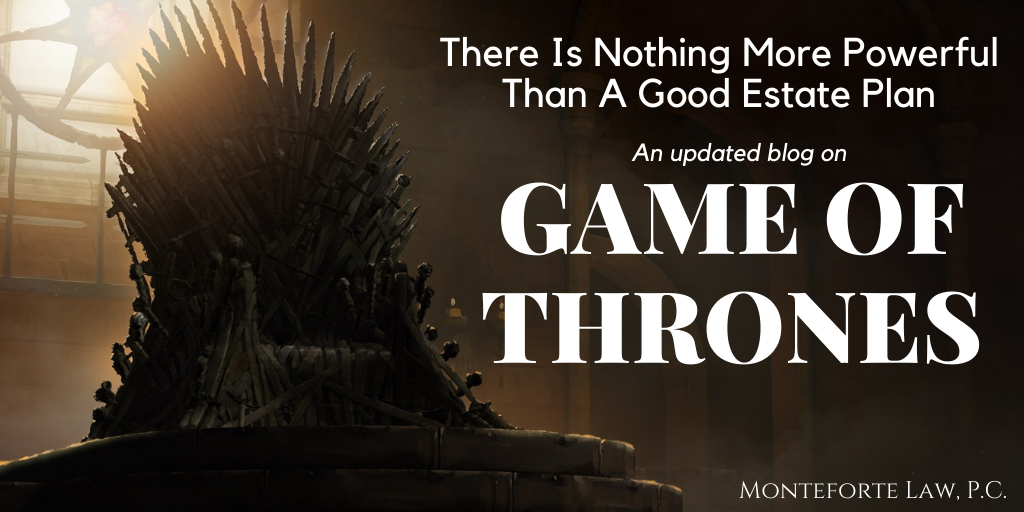 Are we ever going to see more Game of Thrones?

So far, we just don’t know. There’s been talk of spin-offs, and HBO has finally given some confirmation by creating a webpage for a series called House of the Dragon. But there’s no release date set! In the meantime, there are always interviews with the stars of the show, who will sometimes expand on what the original HBO series gave us.

Back in April 2019, I wrote a blog about the estate planning advice I would give to John Snow (read that here). With talks of possibly a reboot or a spinoff, I thought it would be cool to revisit the past and see what has changed since then. See, I wrote that post BEFORE the finale, so I was guessing at where things would end up. I was wrong. Way wrong. My naïve self thought that John and Daenerys would fly off into the sunset (on the back of a dragon) and have children together. So much for that theory. See what else I got wrong, here.

Just recently Emilia Clarke, who played the Daenerys Targaryen, remarked about the finale. When John Snow fatally stabbed Dany in the last episode, Dany’s last living dragon, named Drogon, exploded with fury and with a fiery breath, burned the iron throne to a hunk of molten metal. He picked up Dany’s body and flew away, but the series never said where he went. There was even a fan theory that he was taking her to the Red Priestess, to see if she could be brought back to life by the Lord of Light.

Emilia disagreed though. She thought that Drogon’s grief was so great, that he would simply carry Dany’s body around, never putting her down, until she decomposed to nothing. She told Entertainment Weekly’s, James Hibberd, that “People have asked me about that a lot, it's my tendency to be funny with it and say, 'Oh, Hawaii.' But honestly, if I'm really being very serious about the whole thing: I think he flies around with her body until it decomposes. I literally think he keeps flying until he can't fly anymore. He just keeps grieving".

Even the writer of the Game Of Thrones books, George R.R. Martin, expanded on some of the show’s finer details and explained that many of the scenes in the show were vastly different from the books. Most of those differences were done without discussing them with him first. Pretty crazy since he was the creator of those characters!

Since we may never see a spinoff or any other Game Of Thrones shows, let’s look back at the Estate Planning tips I had envisions for John Snow.

First, we know he didn’t fly away with Dany. Instead, he stabbed her through the heart because her thirst for conquest was getting out of control, and she had seemingly lost the compassion that she showed earlier on in the series. Since John was then banished and sent to live his life with the Wildlings, let’s consider John Snow a widow. In that case, it would be more important than ever for John to have a Health Care Proxy and Power of Attorney. Without a spouse to act in those positions, it is vital that he have someone else, maybe his sister Sansa, or his BFF Sam, to step into those roles. Given his line of work (being a hero and saver of the day) he could certainly need the Power Of Attorney and Health Care Proxy, plus his Last Will. Hell, he already died once on the show! Who says he’d be brought back again?

My advice for John’s avoidance of estate taxes is now flawed because I was assuming he would be married. I had recommended that he set up a Credit Shelter Trust to help avoid estate taxes. If he remarried, that advice would stand. If he did not remarry, I’d have to look at other ways to cut down his estate tax, for example by using a Life Insurance Trust or Medicaid Trust. I had also suggested a Pet Trust for the dragons but little did I know John would not be the dragon daddy. If Drogon does ever come back (and doesn’t burn John to a crisp) then that Trust would still work. That doesn't seem likely though.

I also suggested setting up a Special Needs Trust or Supplemental Needs Trust for Bran, even though he technically turned into the three-eyed raven and probably didn’t need money anymore. Still, had he been a regular guy, and in a wheelchair, the Trust would still make sense.

In the last post, I concentrated so much on John, I didn’t get a chance to make suggestions for his sisters, Arya and Sansa.

Sansa, the new Queen of the North, might not be worried about her estate. She is now the rich and powerful ruler of the North, and as we all know “Winter has Come”. Sansa turned into a badass, and she was ruthless when it was necessary. But as we saw in Game Of Thrones, royalty is often the biggest targets – think Joffrey, Edward Baratheon, Ned Stark, Dany, and John himself. Therefore, it still makes sense for her to have her affairs in order. She needs the Big 3 like Arya, and if she does marry, she will need the Credit Shelter Trust to keep those estate taxes at bay. I would also recommend life insurance for her, and a Life Insurance Trust. I could also look into a Medicaid Trust to protect her castle if she needed long-term care. However, if she were still queen, she’d probably just execute anyone that tried to deny her long-term care anyway.

With a wife, Gilly, and baby, Little Sam, we know he would want a Family Trust, in case anything happened to him and Gilly. That way, Little Sam would be taken care of. He’d likely make John Snow his trustee, and probably guardian for Little Sam as well. We all know John Snow would make one great dad.

That does for another list of Game Of Thrones estate plans.

We will keep looking out for the Game Of Thrones reboot and spinoff, and we will address any new characters, but these original favorites are great! Like to know what I’d recommend for your favorite movie or TV characters’ plans? Email me at [email protected] with your ideas or comment below! If you want to start your planning, schedule a Strategic Planning Session to meet with me. You can do that by calling the office at 978-657-7437 or by booking online at BookMyPlanningSession.com.

Don't hesitate with your planning...Winter is coming.